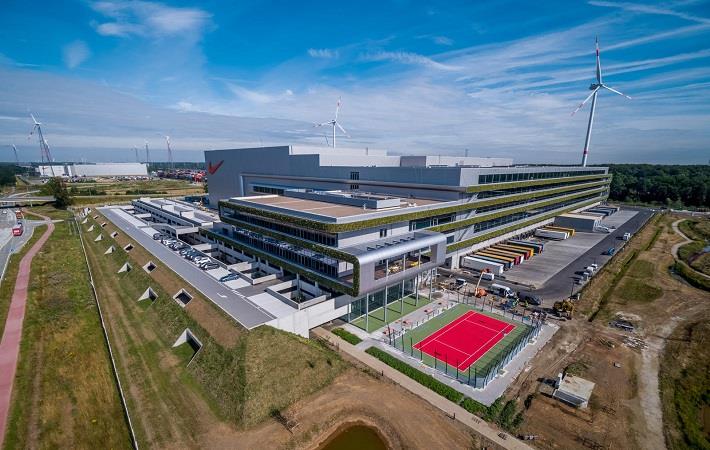 The Court - Nike's European logistics centre. Pic: Nike
In its latest step towards achieving zero carbon and zero waste, Nike has opened a new distribution centre in Ham, Belgium, which is powered entirely by renewable energy. The new 1.5 million square feet facility, called the Court, expands Nike’s logistics capabilities to meet growing consumer demand while advancing sustainability at scale.
The Court operates completely from wind, solar, geothermal, hydroelectric and biomass power. Compared to a traditional warehouse, the Court’s rack-supported structure required less steel and concrete, minimising waste and reducing material used in the construction process, Nike said in a statement.
“Our new Court Distribution Center represents Nike’s continued investment in a fast and flexible supply chain to deliver the full range of our product to consumers when they want it, where they want it,” says Eric Sprunk, Nike chief operating officer. “This state-of-the-art facility will increase our responsiveness as we accelerate our digital growth and better serve millions of consumers across Europe, Africa and the Middle East.”
The distribution centre expands Nike’s European Logistics Campus, which opened in 1994 and today is comprised of six distribution facilities across Ham, Laakdal, Meerhout and Herentals. The Court builds upon a tradition of 25 years of service and commitment to sustainability, adding a logistics system designed for continuous improvement.
Key features of Nike's European Logistics Campus include the use of 100 per cent renewable energy, sourcing energy from five locally generated sources: wind, solar, geothermal, hydroelectric and biomass. In addition to railways and highways, surrounding infrastructure includes a network of canals, enabling 99 per cent of inbound containers to reach the local container park by water. This eliminates some 14,000 truck journeys each year, reducing associated carbon emissions. Further, more than 95 per cent of waste generated on-site is recycled. For instance, pathways used by employees around the facility are made from recycled footwear material.
In addition, new capabilities such as single-order consolidation and faster digital shipments make it possible for the facility to ship a single order as efficiently as an order of 10,000. (RKS)