Time is running out for UK to reach trade deals: BRC 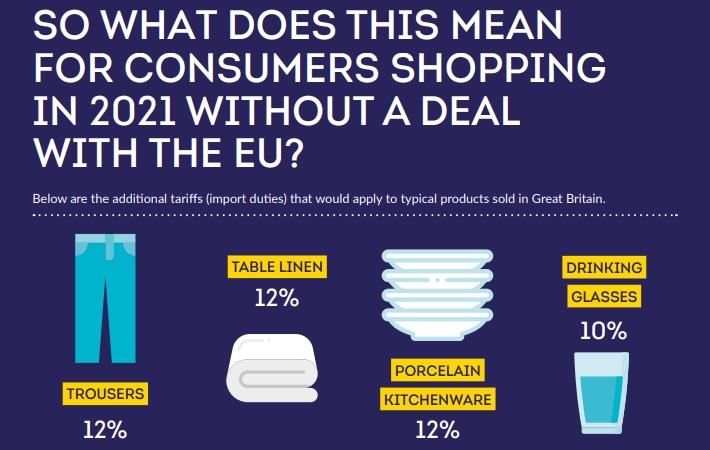 Pic: BRC - Fair Deal for Consumers / July 2020
Achieving a UK-EU deal capable of being implemented in January 2021 is essential, but time is running out, according to the British Retail Consortium (BRC). The UK Government also needs to secure continuity of other existing trade deals covering the UK and then focus on countries where there aren't currently preferential trade deals in place.

The EU is the UK's largest trading partner and the source of a huge amount of the goods it imports. EU imports also play a key role in the supply chains for fashion, homeware, and other retail sectors. So, a zero-tariff and effective regulatory deal with the EU is the best possible outcome for consumers and must be the top priority, BRC said in its latest report 'Fair Deal for Consumers: Why Tariffs are Bad News for UK Consumers'.

The BRC report is a follow up of 'A Fair Deal for Consumers' campaign launched last year to stand up for consumers everywhere and ensure households can enjoy the same great value in shops long into the future. The latest report calls on the UK Government and the EU to negotiate a zero-tariff trade deal to avoid price increases for consumers.

In May, the UK published its new tariff schedule, which will apply from January 1, 2021 if a deal is not agreed. Under the schedule, 85 per cent of foods imported from the EU will face tariffs of more than 5 per cent.

Although the UK is much less reliant on the EU for imports of goods other than food, it is still a significant source of clothing, furniture and other consumer goods. "Tariffs are lower so the risk to consumers of not agreeing a deal is much less than for food. In fact, this is where there are many more opportunities to benefit consumers through new trade deals with current and new preferential trading partners, as our data shows almost half of all consumer goods sold in the UK currently have tariffs on them," the report states.

"Time is running out for both parties to reach an agreement on their future trading relationship and businesses will need time to implement new systems in time for January 1, 2021. The Government must prioritise consumers and secure a deal that ensures no tariffs would be applied to good imported from the EU. Additionally, the deal must keep the impact of non-tariff barriers, such as new regulatory checks, as low as possible to maintain choice and availability," the report adds.

“The next few months are critical to the living standards of millions of people in the UK. For decades, British households have enjoyed great value, quality, and choice, making it a great place to shop. However, without a tariff-free deal with the EU, the public will see higher prices in supermarkets from next year, squeezing millions of families already impacted by the current economic downturn. This is not the fair deal that consumers were promised," said BRC's director of Food & Sustainability Andrew Opie.

“Many UK shoppers experienced disruption in the run up to lockdown; without a deal, the public may face an even bigger challenge at the end of the Transition period. With the clock ticking down to 31st December, the Government must put consumers first and agree a deal that avoids tariffs and minimises the impact of non-tariff barriers. This would prevent harm to shoppers, retailers and the wider economy,” Opie added.

Achieving a UK-EU deal capable of being implemented in January 2021 is essential, but time is running out, according to the British Retail Consortium (BRC). The UK Government also needs to secure continuity of other existing trade deals covering the UK and then focus on countries where there aren't currently preferential trade deals in place.
More British Retail Consortium News... More Apparel/Garments News - United Kingdom...