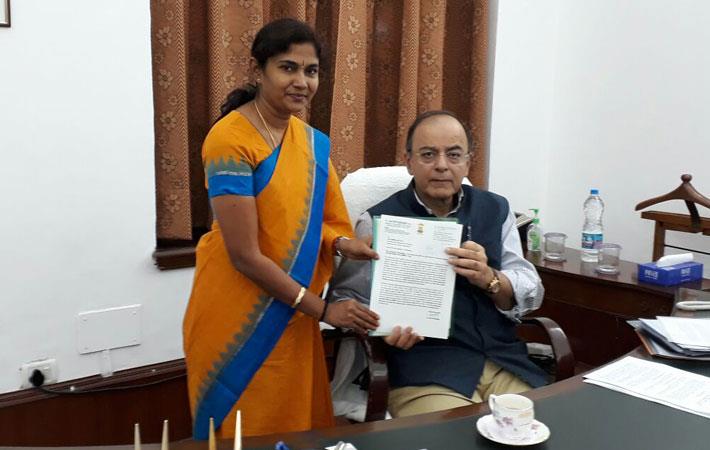 Tiruppur MP V Sathyabama handing over a letter requesting revision of GST rates to Union finance minister Arun Jaitley (seated); Courtesy: TEA
Member of Parliament from Tiruppur, V Sathyabama today spoke about the need for revision of Goods and Services Tax (GST) on job work on wearing apparel from 18 per cent to 5 per cent and also for revision of man-made fibre yarn GST from 18 per cent to 5 per cent in Parliament. She also handed over a memorandum directly to Union finance minister Arun Jaitley.

Originally, the GST rates for job work on textiles and apparel was kept at 18 per cent. It was subsequently revised downward to 5 per cent during the meeting of the GST Council held on June 11. “However, the revision of rates was made applicable only for job work on cotton yarn and textile fabrics, while the job work made on wearing apparel was excluded from this rate reduction. This is a huge setback for clusters like Tiruppur since considerable amount of job work activity takes place at the garment stage by micro industry, which is made liable for GST at 18 per cent,” Sathyabama said in her letter addressed to Jaitley.

“It is requested that uniform rate of 5 per cent be made applicable for all the job works in textile manufacturing value chain so that this undue hardship faced by several micro industries is redressed,” the MP said.

In her letter, Sathyabama also mentioned about the impact of higher GST for man-made yarn on Tiruppur knitwear cluster and weaving clusters like Somanur and Palladam.

The GST on man-made fibre and yarn is kept at 18 per cent, while fabrics made of MMF is kept at 5 per cent. “This results in an inverted duty structure which was entirely against the intent of the GST rollout of ensuring seamless credit flow,” the MP said.

Another fact that is causing extraordinary difficulties for the industry is that no refund of excess input credit is available for fabric manufacturers.

“It is requested that either the GST rate on MMF yarn be reduced to either 5 per cent or 12 per cent – or in the alternative, provision on refund of excess input credit be given to the fabric manufacturers,” the letter said.

Tiruppur Exporters’ Association (TEA) president Raja M Shanmugham thanked the MP for taking up the issue in Parliament and handing over memorandum to the Union finance minister. (RKS)