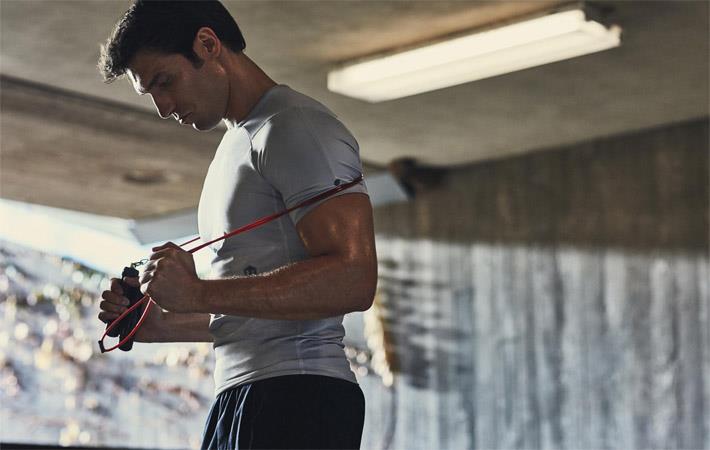 "UA Rush is Under Armour's newest performance apparel line, designed to be worn at the time of sweat. This scientifically engineered fabric promotes improved performance and energy return. In simplified terms, UA Rush is intended to provide the same benefits to the body as an infrared saunam," Under Armour said on its website.

Minerals found naturally in the earth are extracted and broken down into active particles, which are then melded together to form a proprietary blend. The blend is then infused into the fibers that are ultimately knit into UA's high-performance fabrics that make up the gear in the collection, the website explained.

During performance, the body emits heat. The responsive UA Rush fabric absorbs that heat and converts it into infrared energy that is re-emitted back into the body. This recycled energy increases temporary localized circulation, promoting improved performance, energy and recovery. When worn, UA RUSH stimulates increased endurance and strength.

"The introduction of UA Rush is our commitment to giving athletes 360-degrees of training support both in the gym and beyond. With the launch of UA Rush, we now complete the training cycle - there is now UA gear designed to optimize human performance at every training occasion," Dan Leraris, general manager of men's training at Under Armour.

Under Armour athletes from around the globe have been training in UA Rush for their biggest moments. UA will be providing a glimpse into the training experiences of some of the world’s most elite athletes – Stephen Curry, three-time NBA champion and two-time MVP; Kelley O’Hara, world cup champion soccer player; and Anthony Joshua, heavyweight champion of the world– in the form of a documentary launching this summer.