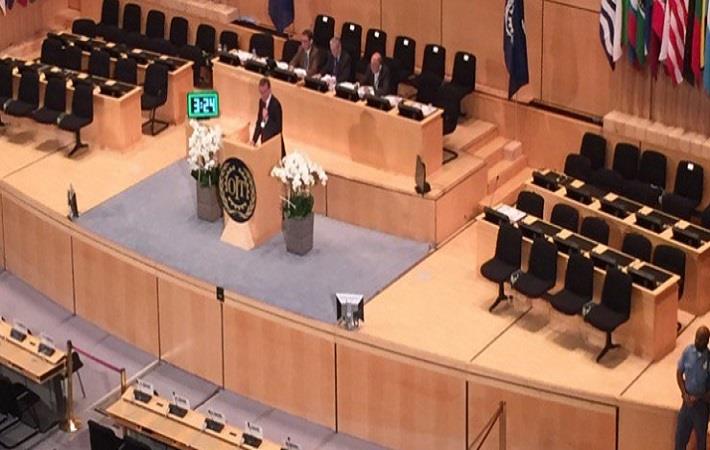 In his address at the International Labour Conference in Geneva, Jennings criticised those who would oppose the Convention and described them as barriers to progress, contrasting them with UNI and its sister global union IndustriALL and the Bangladesh Accord. The Accord is regarded as a blueprint for change in supply chains.

Jennings said, “UNI Global Union and IndustriALL are proud of this achievement. The Accord has brought the world to change policy and practice on supply chains at this ILC.

“My emotions flow from the Rana Plaza tragedy of 2013. The race to the bottom evidenced in all its squalor and human desperation. Over 1,000 deaths. Families scarred by loss. Condemned by negligence. A supply chain based on lies, deception, corruption and a woefully inadequate local health and safety environment, with government and private employer complicity.

Jennings said the ILO was now itself standing at the crossroads on supply chains and is faced with a choice of global magnitude. The low road of avoiding responsibility to millions of workers who toil in the supply chain. Or a higher road to decent work.

“Don't blow this opportunity. Governments: demonstrate that you 'have the back' of your workforce. Don't accept foreign investment at any cost. The business community: show that it cannot be business as usual,” he told delegates.

Jennings condemned those who sought to unfairly criticise the Bangladesh Accord:

“The Bangladesh Accord has made progress on the ground. Independent. Transparent. Inclusive. Lives saved. Safety improving.

The ILO role was critically important and essential in the pursuit of compensation. The Bangladesh Government is an enemy of freedom of association and is now using its poisonous policy to eliminate a union presence in the IT sector.”

“So ILO 2016 don't shy away from the fight, YES to an ILO Supply Chain Convention. Let's make it happen.” (SH)

Nishant Giri
Jindal Worldwide Limited
We expect the Government to come out with a better...
Christina Dean
The R Collective
Our goal is to #EndFashionWaste
Yogesh Chaudhary
Jaipur Rugs
Our products are sold by choice and not by compulsion
Vikash & Vishal Pacheriwal
Raisin
Critical thinking & strategising have to be your strongest...
Sonam & Paras Modi
SVA
'Textile Policy should incorporate measures against...
Catalin Valean
ATU BODY COUTURE
I always design to educate and not to please
Anisha Chaudhari
Threads & Shirts
Corporate people have few workwear options