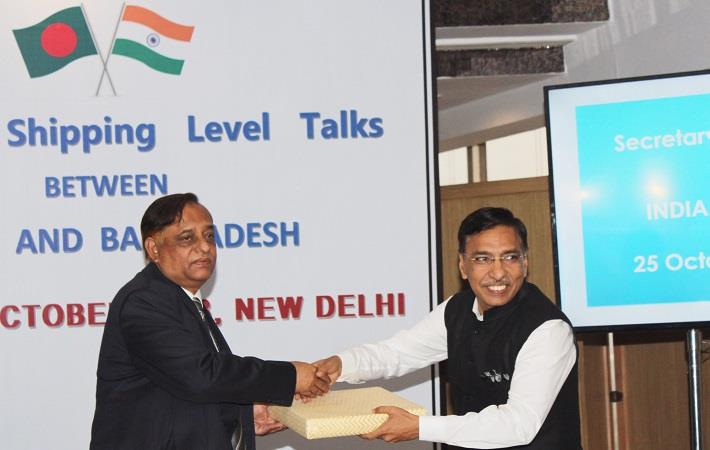 Gopal Krishna (right), Secretary, Ministry of Shipping, India, and his Bangladeshi counterpart Md. Abdus Samad at the Secretary Shipping Level Talks between India and Bangladesh. Courtesy: PIB
India and Bangladesh have signed several agreements for enhancing inland and coastal waterways connectivity between the two countries for trade and cruise movements. The agreements will facilitate easier movement of goods and passengers between the two countries, giving an impetus to trade, tourism, and export-import cargo by reducing logistic costs.

The two countries have signed an agreement to use Chattogram and Mongla Ports in Bangladesh for movement of goods to and from India, India’s shipping secretary Gopal Krishna and his Bangladesh counterpart Md. Abdus Samad said while briefing media person in New Delhi after signing the agreements.

A Standard Operating Procedure (SOP) has also been signed for movement of passenger and cruise services. In addition to this, an addendum to ‘Protocol on Inland Water Transit and Trade’ (PIWTT) between India and Bangladesh has been signed for inclusion of Dhubriin India and Pangaonin Bangladesh as new Ports of Call.

“The two sides agreed to consider inclusion of Rupnarayanriver (National Waterway-86) from Geonkhali to Kolaghat in the protocol route and to declare Kolaghatin West Bengal as new Port of Call. Chilmari was agreed to as a port of call in Bangladesh. The new arrangement will facilitate movement of flyash, cement, construction materials etc from India to Bangladesh through IWT on Rupnarayanriver,” India’s ministry of shipping said in a statement.

Further, both sides agreed to declare Badarpur on river Barak (NW 16) as an Extended Port of Call of Karimganj in Assam and Ghorasal of Ashuganj in Bangladesh on reciprocal basis.

Currently 3.5 MMT cargo is transported on protocol routes through inland waterways which is expected to increase substantially after the declaration of additional Ports of Call and extension of protocol routes.

The North Eastern states would get connected directly to the ports of Kolkata and Haldia in India and Mongla in Bangladesh through waterways which would facilitate movement of export-import cargo and would also reduce the logistic costs.

In another important understanding reached at between the two countries, the Standard Operating Procedure (SOP) for movement of passengers and cruise vessels on Inland Protocol route and coastal shipping routes have been finalised. These river cruise services are likely to commence between Kolkata – Dhaka – Guwahati – Jorhat and back.

Both sides have also agreed for development of Jogighopa as a hub/trans-shipment terminal for movement of cargo to Assam, Arunachal Pradesh, Nagaland and Bhutan and notifying Munsiganj River terminal by Bangladesh Customs for routing third party Exim cargo through Kolkata Port. (RKS)