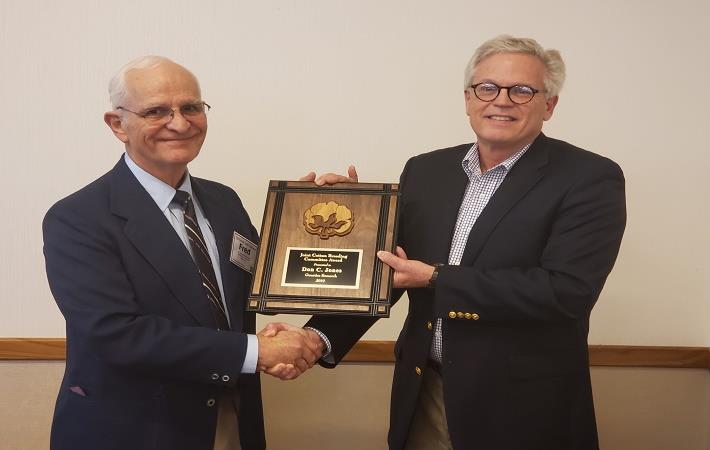 Jones, who has devoted his 35+ professional years to plant breeding and genetics, received a plaque and a monetary award.

Since 2009, Jones has been instrumental in the development and collaborative release of more than 50 public germplasm lines resulting in six cultivars. Of those six, two have exceptional fibre quality – traits that are valued by the market and that help to maintain cotton’s competitiveness.

Jones led the development of a Universal Material Transfer agreement that helped protect the intellectual property of public cotton breeders/institutions and later private seed companies who were willing to abide by the agreement. He also spearheaded efforts to identify cotton fields with appropriate levels of Fusarium wilt race 4 (FOV4) infection and coordinated the first nationwide screen for resistance – an effort that identified 11 breeding lines with possible resistance to this upland cotton production disease threat.

Participation has increased by 40 per cent in the biennial Cotton Breeders Tour since Jones began organising the event which fosters communications/provides training for researchers. He assembled the public/private sector consortium that developed and oversees Cotton Incorporated funding support for CottonGen, the cotton community’s genomics, genetic and breeding database.

Jones also stepped up and established the current Cotton Winter Nursery in Costa Rica after it had to be moved from Mexico. Now in its fourth season, the nursery provides expedited cotton breeding efforts by providing a tropical area to rejuvenate cotton genetic resources maintained in the national cotton germplasm collection.

“Jones’ interpersonal skills have resulted in numerous examples of building successful research teams that led to major impacts for the industry. Don’s ability is to bring the best and brightest cotton genomics scientists together on a unified team to produce the first gold standard reference genome for the cotton industry. Since leading this collaborative effort, the cotton industry has seen an explosion of scientific advance using knowledge of the cotton genome,” said Dr. B Todd Campbell, a USDA research geneticist.

The author of 74 peer-reviewed publications in the past decade, Jones received the 2017 Special Service award from Texas A&M University and the 2019 Agronomic Industry award from the American Society of Agronomy.

The annual Cotton Genetics Research Award was established in 1961 by US commercial cotton breeders to recognise and encourage basic research in cotton genetics, cytogenetics and breeding. It is administered by the Joint Cotton Breeding Committee consisting of representatives of the NCC, the USDA, state experiment stations, Cotton Incorporated and commercial breeders.

Concerns of UK manufacturers regarding shortage of low-wage workers...

The versatility and resilience of retailers helped many stores...