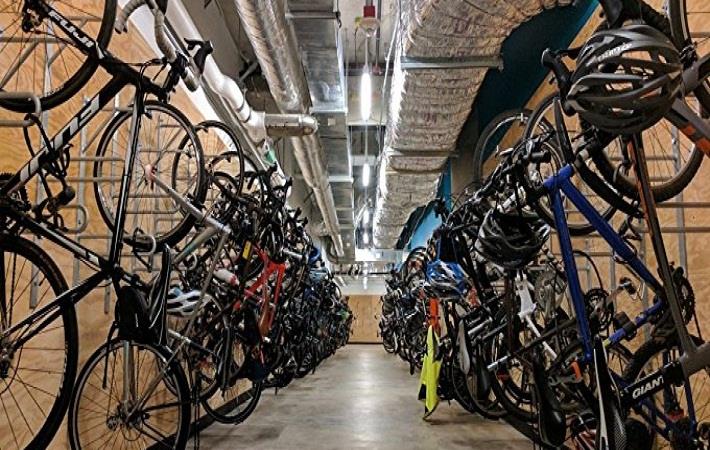 Pic: Amazon
Located in Hyderabad's financial district and spread over 9.5 acres, Amazon has inaugurated its largest campus building worldwide as a continuing reaffirmation of how India continues to be a key market as well as talent hub for it. This is the only Amazon-owned campus outside US and will house over 15,000 employees of its over 62,000 employee base in India.

With 15,000 work points across 1.8 million square feet in office space, built on 3 million square feet of construction area, this is Amazon's single largest building in the world in terms of total area. The infrastructure has been developed in adherence to Amazon's exacting standards, designed to facilitate inclusion of employees with special needs and support its diverse workforce.

"Telangana is happy to host Amazon's largest building campus in the world. Amazon has played a significant role in creating job opportunities in Hyderabad for more than a decade. This facility was built in a record time of just over 3 years, showing the ease of doing business with the Government of Telangana. It also showcases our investment-friendly policies and commitment to create a hub for high quality talent pool," said Rao in a company press release.

"We are excited to inaugurate our largest campus building globally here in India at Hyderabad. Over these last 15 years we have invested significantly in India across 30 office spaces, the AWS APAC Region in Mumbai, 50 Fulfilment Centers in 13 states of India as well as hundreds of delivery stations and sort centres, creating nearly 200,000 jobs in India. This new Amazon campus building is a tangible commitment to that long-term thinking and our plans for India," said Agarwal. "I would like to thank the Government of Telangana for its investment-friendly policies and continued support that has always encouraged us to continue to invest and grow our operations here."

Thousands of employees in the campus will benefit from Amazon's agile-based work environment, where they can select from a variety of workspaces to suit their needs. The facility features casual, collaborative workspaces, as well as private areas for concentration and confidentiality. Interfaith prayer rooms, mothers' room, quiet rooms, showers, helipad, and an all-day open cafeteria are designed to facilitate inclusion and diversity. Every detail is aimed at improving well-being and efficiency, from Destination Control Systems to manage elevators that can move 972 people simultaneously, to 290 conference rooms and 3 scrum areas per floor to foster collaboration.

"The infrastructure has been designed as per Amazon's exacting standards, to foster inclusion and a sense of belonging among all Amazonians, including colleagues with special needs. Comfortable and flexible workspaces encourage creativity, productivity, and collaboration, which are key tenets of Amazon's work culture. We look forward to creating an environment where diverse contributions are welcomed and innovation encouraged for the long term," said Schoettler.

The total built-up area of the campus when spread out will span over 68 acres (approximately 65 football fields). The construction was awarded the Golden Trophy and Certificate from the National Safety Council for safe construction practices in 2018. The campus contains over 2.5 times more steel than the Eiffel Tower, measured by weight. The building meets stringent safety standards, with 110 km of fire protection system conduit. The 86-metre buildings are accessed by 49 elevators with high-rise elevators that can move at the speed of one floor per second. The campus has one conference room seat for every 3.25 workstations, higher than the global ratio of 1:5

For the first time, Amazon is also experimenting with the Inside Day 1 Alexa Skill (beta) to use Alexa for employee engagement. Built by Amazonians, the Inside Day 1 Alexa Skill (beta) will be hosted inside an Alexa Pod, where employees can walk-in and access information on Amazon in an instant, contextual and friction-free manner by asking Alexa. The Inside Day 1 Skill is a self-help tool for employees to understand more about Amazon and the new Hyderabad facility. Questions can vary from new hire orientation, internal policies and practices, facilities or Amazon's leadership development initiatives.

Amazon laid the foundation stone for the campus building on March 30, 2016. An average of 2,000 workers were on site every day for 39 months to construct the building, spending 18 million man-hours to create a world-class working environment. Sustainability is at the core of the building which has more than 300 trees dotting its grounds with three specimen trees aged over 200 years and has a 850,000-litre water recycling plant.

Amazon first started operations in India in 2004 from Hyderabad. The state of Telangana is now home to a third of Amazon’s total India employee base across six offices, including the new campus building. Several Technology / Engineering and Operations teams operate from Amazon’s various offices in the city where the company also has a large Customer Service operation. Amazon also has 3 Fulfilment Centers in the state offering more than 3.2 million cubic feet of storage space to sellers, two sort centres with 100,000 square feet of processing capacity and 90 delivery stations. In addition, over 20,000 small businesses in the State are directly associated with the company’s operations either as Sellers, I Have Space store partners Amazon Easy points or as Service Providers. (PC)

Located in Hyderabad's financial district and spread over 9.5 acres, Amazon has inaugurated its largest campus building worldwide as a continuing reaffirmation of how India continues to be a key market as well as talent hub for it. This is the only Amazon-owned campus outside US and will house over 15,000 employees of its over 62,000 employee base in India.
More Amazon News...