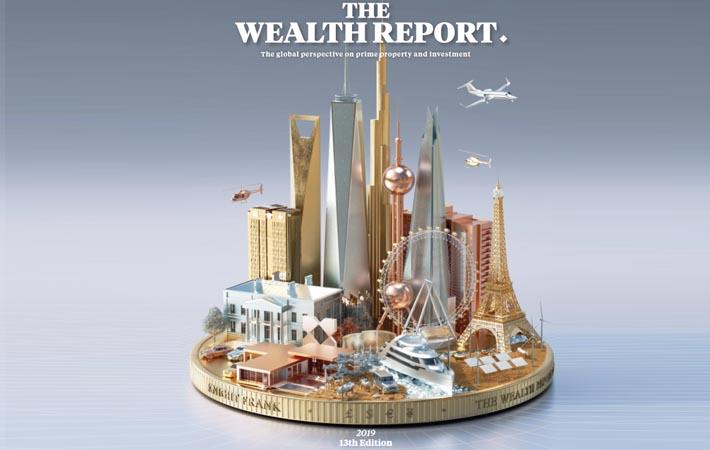 Pic: Knight Frank
London will remain the leading global wealth centre in 2019, according to the 13th edition of ‘The Wealth Report’ published by Knight Frank. With the world’s largest ultra-high-net-worth individual (UHNWI) population, London sweeps the board in the annual ‘City Wealth Index’ pushing its rival, New York, into second spot, shrugging off concerns regarding Brexit.

In the wealth category, London has the largest population of 4,944 UHNWIs, an increase of 582 over the last five years, the most of any city. For high-net-worth individuals (HNWIs), Tokyo reigns supreme with 488,582, although New York has seen the highest growth with an additional 55,434 HNWIs. New York also has the highest concentration of billionaires, with 94.

Growth in Asia for high-net-worth individuals is noticeable, with Asian cities holding six of the top ten spots in the wealth category, the report says. Asia’s strong economic performance with the fastest growing UHNWI populations means 2019 will be the year the number of US$ millionaires globally exceeds 20 million for the first time. India will lead five-year growth with 39 per cent, followed by the Philippines (38 per cent) and China (35 per cent).

According to the report, the wealthy will continue to demand access to global markets, especially as emerging economies see growth rates slow and the search for diversification grows. A record 26 per cent of global UHNWIs will begin to plan for emigration this year, and to help them a record number of countries will offer citizenship and residency through investment schemes, with Moldova and Montenegro the latest to offer themselves as wealth havens. Some governments are actively enticing wealthy individuals to relocate with favourable tax regimes, while others are introducing overseas buyer taxation on residential purchases. Indian buyers are typically attracted by world class education opportunities for their children, new business ventures and stable investment returns. Coveted markets such as London, Melbourne and Dubai draw significant interest of the Indian crowd.

In terms of investor opportunities, there will be some beneficiaries if trade tensions between the US and China persist. The countries where exporters to the US stand to benefit include Mexico, Canada, Vietnam, Bangladesh and Germany.

The report further says that 2019 will be the year when theorising over the potential impact of block chain gives way to an appreciation of what it can achieve: helping to prove the authenticity of the $2 trillion of luxury goods sold annually; confirming the ownership of art; enabling fractional ownership of some of the world’s most desirable collectibles; and facilitating the creation of $170,000 digital cats. (PC)

London will remain the leading global wealth centre in 2019, according to the 13th edition of 'The Wealth Report' published by Knight Frank. With the world's largest ultra-high-net-worth individual (UHNWI) population, London sweeps the board in the annual 'City Wealth Index' pushing its rival, New York, into second spot, shrugging off concerns regarding Brex
More Fashion News - Global...