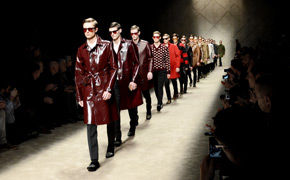 Burberry announces that it will be moving its menswear show to London after more than ten years of showing in Milan.

Following the return of the Burberry womenswear show to London in 2009, the menswear collection will be shown as part of London Collections: Men on 18 June 2013.

Burberry has been supporting London Collections: Men since its launch in June 2012, hosting events in celebration of British menswear at the brand’s Knightsbridge stores.

Burberry announces that it will be moving its menswear show to London after more than ten years of showing in Milan.Following the return of the #

"London is the creative heart of Burberry and our global headquarters, so we are incredibly excited to be showing our next men's collection here. The country's proud menswear heritage and outstanding contemporary talent give it a unique and powerful energy. It is a wonderful time to be bringing our menswear show home" - Christopher Bailey, Burberry Chief Creative Officer

Having relocated its global headquarters to Horseferry House in London in 2009, Burberry continues to invest in its UK manufacturing, retail and office operations, adding more than 1000 jobs in the country over the past two years.

Burberry continues to produce its heritage rainwear at its Castleford facility in Yorkshire, where capacity has doubled since 2011. The iconic gabardine fabric used in the coats' construction is woven at Burberry's nearby mill and the brand's cashmere is woven in Scotland.

Since 2011 Burberry has significantly expanded its London store footprint, including opening the Burberry World Live flagship at 121 Regent Street and the brand's first standalone menswear store in Knightsbridge in 2012. It will open a second headquarters building adjacent to Horseferry House later in 2013.

Burberry is committed to fostering the next generation of creative talent in the UK. Its support includes the establishment in 2012 of the Burberry Design Scholarship with the Royal College of Art in London and Christopher Bailey's chairmanship of the Fashion Fringe initiative, which supports emerging designers and celebrates its 10th anniversary this year.