US designers to present FW lines in China on June 21 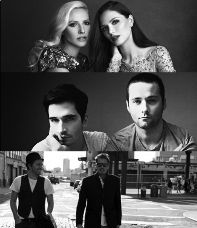 With the generous support of Silas Chou, the CFDA/Vogue Fashion Fund launched a program in 2012 to help foster the exchange of emerging design talent between the United States and China.

The Council of Fashion Designers of America (CFDA) and Vogue are pleased to announce the expanded “Americans in China” initiative, to take effect in June 2013.

Proenza Schouler, Rag & Bone, and Marchesa, three former CFDA/Vogue Fashion Fund finalists, will travel to Beijing, where they will present their fall-winter 2013 collections on June 21, 2013, to a select group of media and VIP guests as part of the ongoing effort to introduce American design talent to the rapidly expanding luxury market in China.

With the generous support of Silas Chou, the CFDA/Vogue Fashion Fund launched a program in 2012 to help foster the exchange of emerging design talent #

The three collection presentations will take place at the Ming Dynasty City Wall Relics Park, at the Great Wall of China.

“These are exciting times in China. There is great opportunity for American designers,” said CFDA president Diane von Furstenberg.

On June 20, the designers will be honored at a cocktail reception hosted by Gary Locke, U.S. Ambassador to China, and his wife. Following the reception, Vogue China’s editor in chief, Angelica Cheung, will host a dinner to welcome the designers to the city.

About the CFDA/Vogue fashion fund:

The CFDA/Vogue Fashion Fund was established to help emerging American design talent find continued success in the business of fashion. With growing industry support, in 2010 the prize was raised to $300,000 for the winner and $100,000 to the two runners-up. It is expected that the awards will be used to further develop each designer’s business in such areas as marketing, public relations, production, and sales.

In addition to the cash prizes, awards also include mentorship from an esteemed group of industry professionals whose expertise is tailored to the designers’ needs and future goals. Past mentors include Howard Socol, Rose Marie Bravo, Millard “Mickey” Drexler, Mark Lee, Maureen Chiquet, and Domenico de Sole.

In 2007, the CFDA/Vogue Fashion Fund created a separate Business Advisory Committee to review the applications of the ten CVFF Finalists (independently of the Selection Committee) with the intent of providing a more focused business perspective and targeted feedback on the designers’ potential in the business. The Business Advisory Committee will also be available to the seven finalists (who are not chosen as a winner/runner-up) as an ongoing resource for mentoring, questions and answers, and guidance.

Council of Fashion Designers of America