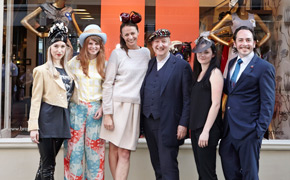 Five milliners supported by the British Fashion Council’s Headonism scheme will have their work on sale at a pop-up on the first floor of Browns from the 5th – 17th June.

The edit selected by Browns will include AW13 pieces from Aurora Ozma, Emma Yeo, Moody and Farrell, Piers Atkinson and William Chambers.

Headonism is a British Fashion Council initiative curated by Stephen Jones that celebrates the new wave of emerging London milliners.

Stephen Jones, milliner and curator of Headonism, commented: “As the curator of Headonism, I am delighted and honoured that Browns is hosting this event, as this was the shop that I first sold to in 1980. Mrs. Burstein has been one of British fashion’s most loyal supporters. See you at the track.”

Caroline Rush, CEO of the British Fashion Council, commented: “It’s great for all five milliners to have a presence at one of the world’s leading independent retailers in the run up to Royal Ascot.

"With the pop-up housing the biggest emerging names in British hat-making, it’s an incredibly exciting opportunity for the capital’s race-goers and consumer audience alike to discover so many innovative and beautiful hats under one roof”.

“Browns is very proud of its long tradition of launching and supporting new talent, so we’re delighted to work with the British Fashion Council and their Headonism scheme to offer customers our edit of the best emerging milliners in Britain.” - Simon Burstein, CEO of Browns.