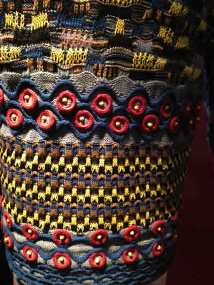 Wool and the animal fibres are of course the main players on this winter stage in this season.

The depth, cosiness and the different gauges which can be obtained from well-known natural fibres are extended with judicious choices of decoration such as twists, blends for effect like a slight shimmer, very subtle and underplayed, coatings and feltings, all giving a feeling of vigour and youth to traditional yarns.

Companies are taking on the message given recently by the highly respected elder statesman of fabrics, Nino Cerruti, who has stated several times recently that even though spinners and knitters may be using wool with an innate heritage factor, companies are beholden to make sure the fibre is made known to the next generation as being young, new and dynamic.

The Wool Lab stand was constantly crowded  with designers, many from major design houses and brands, as the themes for AW 2014/15 were expanded, first seen a fortnight earlier in Pitti Uomo: Street Market, Cinque Ports, The Club and others found an echo with creative Pitti Filati visitors sourcing ideas. Knitting was identified as a huge growth area, backed up by Wool Lab’s Xtreme Knitwear section and further emphasised in Pitti’s expansive knitting yarn collections, with textures, airy weights, dyed and printed effects, many demonstrated in the Spazio Ricerca.

The Feel the Yarn design competition was won by YiYi Gou from Beijing, partnered with New Mill/Fashion Mill yarns. She had a splendidly colourful array of knit details in her winning designs in soft brushed wools displaying a startling sense of colour - turquoise, red, bright yellow and white, and with a complicated and inventive use of stitches for a 3D effect.

Stock yarns now include the most inventive designs. Chiavazza woollen spun Supergeelong yarns now come in extensive 135 stock colours. It was not surprising that the trade was in better spirits at the end of Pitti Immagine Filati than it had been at the beginning of the week, looking for a bright 2014/15.