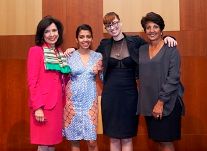 New York City Economic Development Corporation (NYCEDC) and the Fashion Institute of Technology (FIT) announced the winners of the second class of Design Entrepreneurs NYC (DENYC), a free, intensive, “mini-MBA” program that teaches emerging New York City-based fashion designers how to run successful label. The program culminated with business plan presentations by the top 16 of the 35 businesses who participated in the 2013 program.

The second-place winner, Vasumathi Soundararajan, whose company Ken Wroy, Inc., designs men’s underwear, will receive $10,000. Funding for these awards is provided by a financial contribution from G-III Apparel Group.

“By providing assistance to growing fashion labels, we ensure that New York City will remain at the center of the fashion world.”

“FIT is proud to partner with the NYCEDC and G-III for the second year of this innovative program,” said Dr. Joyce F. Brown, president of FIT.  “We are particularly grateful to G-III for enhancing this year’s program with a generous gift.  Because FIT offers career-oriented education on both the design and business sides of the fashion industry, the college is an ideal environment in which to host Design Entrepreneurs NYC – a cornerstone of the mayor’s initiative to ensure that New York City remains the fashion capital of the world.  DENYC gives our City’s creative talent the tools that will allow them to flourish.”

Chromat’s designs focus on structural experiments for the human body.  The company began in 2010 as an extension of McCharen’s degree in architecture design; and her interest in scaffolding, city maps, wearable exoskeletons and the intricacies of undergarments has been explored as each new collection develops.

Chromat swimwear, lingerie, and signature architectural cages are all made in New York City. Soundararajan’s company, Ken Wroy, is a designer brand of men’s underwear. Its urban fashionable feel is inspired by New York City’s spirit of being bold, stylish, and electrifying.

The 35 businesses in DENYC Class of 2013, selected from 193 applicants, span a range of fashion categories, including accessories, shoes, jewelry, children’s wear, men’s apparel, and women’s apparel. They studied throughout the U.S. and the world, including at schools in London, Sydney, and Saitama, Japan, though many graduated from New York City colleges, including Pratt, Parsons, and FIT.