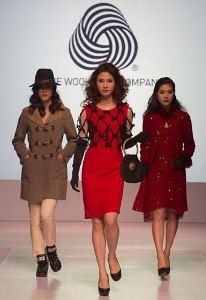 With a vintage Yves Saint Laurent lavender floral dress – looking as good now as it did back in the 1970s – opening the fashion show, the standards were set high for the garments to follow during the two ‘40 years of wool in fashion’ events.

The Woolmark Company - with the support from Vietnam’s leading knitwear brand CANIFA - hosted two retrospective fashion shows as part of the celebrations highlighting 40 years of trade and diplomatic relations between Vietnam and Australia.

The two shows emphasised some of the most important and leading global designers and how they have used wool to determine trends and influence their generation during the past 40 years, as well as draw attention to the natural excellence of Australian Merino wool.

With a vintage Yves Saint Laurent lavender floral dress – looking as good now as it did back in the 1970s – opening the fashion show, the standards #

The first event was held October 17 at the beautiful White Palace Convention Center in Ho Chi Minh City. The second ’40 years of wool in fashion’ event took place in Hanoi on October 19 at the Hanoi Daewoo Hotel.

The retrospective pieces which went down the runway were specially loaned for the event by the Darnell Collection, with curator Charlotte Smith explaining the evolution of wool in fashion during the past 40 years.

About 40 garments were modelled as part of the show, with pieces from the 1970s, 80s, 90s and today, designed by some of the world’s leading fashion designers including Emilio Pucci, Thierry Mugler, Missoni, Jenny Kee, Vivienne Westwood, Versace, Burberry and Easton Pearson. A garment from the capsule collection designed by the2012/13 International Woolmark Prize winner, Christian Wijnants, was also shown, presenting a more modern interpretation of Merino wool.

“I’m very honoured; it’s a very joyful feeling to be in the fashion shows as a Vietnamese designer and to work with The Woolmark Company for the celebration of the 40-year relationship between Vietnam and Australia,” Hà said.

“Wool is a perfect and wonderful material and during the time I worked with wool I received a lot of help from the company and I am so glad to be here today.”

The celebrations are part of Out of Vietnam project, which has seen The Woolmark Company working towards developing a sustainable supply chain in Vietnam and expand its current manufacturing market by introducing Australian wool into the pipeline.

The Woolmark Company CEO Stuart McCullough said that since the project launched in 2012, the global authority on wool had already engaged more than 50 manufacturing partners.

“The response to Out of Vietnam has been tremendous and all agreed partners have shown the utmost confidence in the project,” Mr McCullough said. “We will continue with our efforts to develop more partners in Vietnam and look forward setting up an established manufacturing base.”