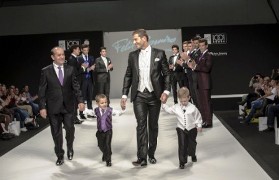 Felix Ramiro, the undisputed leader of male bridal fashion industry, presented an eclectic collection of groom attires on the just concluded fifteenth edition of Spanish wedding extravaganza ‘Las Mil y Una Bodas’ 2013.
The Spanish designer, with an experience of designing men’s wedding creations for more than two decades, staged three fashion shows on the final day of the event.
The catwalk collections included nearly 20 looks, made from wool, silk, acetate and viscose, for bridegroom, best man and guests.
The featured ensembles included an array of classic tuxedos, tailored formal suits and ceremonial wear for children.
Founded in 1988, the Spanish label owns around eight outlets across Madrid and the autonomous community of Castilla-La Mancha.
With a net production of over 11,000 pieces per year, the label has recorded a sales growth of about 8 percent in the last year.
The company is currently in a major international expansion spree with plans to open retail outlets in parts of Eastern Europe, particularly in Romanian cities like Bucharest and Cluj Napoca, and Latin American markets, such as Panama, Colombia and Mexico.
Other than Felix Ramiro, the Madrid event also featured bridal fashions from labels like Pronovias and Charo Peres.
Organised by IFEMA, Las Mil y Una Bodas is the one-stop destination for all wedding related products and services.