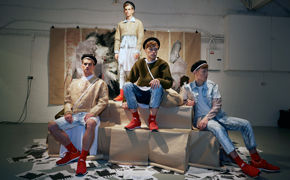 The ground-breaking platform is internationally recognised for championing emerging menswear designers and for the first time will collaborate with Red Bull Catwalk Studio.

London’s most promising new talent will take over a space in Covent Garden for an afternoon of unmissable and innovative Autumn/Winter 2014 presentations during London Collections: Men.

Fashion East is pleased to work with Red Bull Catwalk Studio for the first time. Red Bull will give the initiative wings and support the designers with made-to-measure mixtapes, providing the soundtrack for the event.

“We really love what Red Bull’s all about and their amazing work nurturing new talent. It totally fits with Fashion East’s ethos. We’re really excited to be working with them!” - Lulu Kennedy, Director of Fashion East

The Menswear Installations were created by Fashion East in 2009 as an auxiliary platform to MAN at a time when there were no other menswear showcases in London. The event is central to London’s incredible reputation for menswear, having set the ball rolling by scouting and launching the powerhouses of today’s menswear scene.