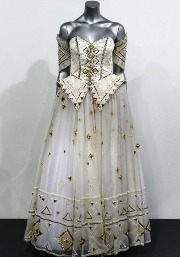 courtesy: fashion.telegraph.co.uk
Another gem from the late royal fashionista Princess Diana’s wardrobe recently went under the hammer for a sum of £102,000.
The London-based costume and textile auctioneer Kerry Taylor Auctions has just sold the famous fairytale ballgown, worn by the Princess of Wales on several occasions, at its Passion for Fashion event.
Part of the former husband and wife design duo, David and Elizabeth Emanuel, created Diaghilev collection in 1986, the gold and white coloured dress, which includes optional sleeve panels and long flowing skirt, is sumptuously decorated with intricate sequin embroidery.
Originally expected to fetch anywhere between £50,000 and £80,000, the dress was first spotted by the princess at a Red Cross benefit fashion show.
The sophisticated lady wore it on three public appearances—first at the German Ambassador’s London banquet, then to Bolshoi Ballet’s ‘Ivan the Terrible’ performance at Royal Opera House, and finally to the premiere of James Bond flick ‘The Living Daylights’ in Leicester Square, in June 1987.
Later, the Princess auctioned the gown through the auction house Christie’s, in London, to raise money for her charities.