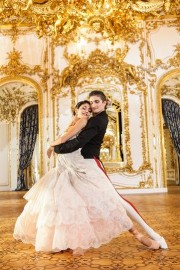 c: WWD/ORF/GÃ¼nther Pichlkostner
Dame Vivienne Westwood, the renowned English fashion designer, has added another feather to her glorious cap by designing costumes for one of the top ballet companies in the world, Vienna State Ballet.
According to WWD, the fashion veteran, who is known for her punkish creations, has created outfits for a live Waltz performance, which would take place during the intermission of Vienna Philharmonic Orchestra’s New Year’s Concert on January 1, 2014.
Replete with Westwood-style romantic elements, the designs will include a bespoke edition of the sumptuous silk taffeta Moon dress (for dancer Kathrin Menzinger) from the 72-year-old design talent’s spring 2014 Gold Label collection and a black double-breasted jacket and black silk pant ensemble, to be worn by dancer Vadim Garbuzov.
Other than the live performance, a film on Vienna’s Liechtenstein Museum’s ballet performance, which would again showcase some additional creations from the Derbyshire-born designer-cum-social activist, will also be featured during the concert intermission.
Those added ensembles will include a buttercup yellow gown, inspired from her spring 2005 collection, and a deep burgundy tulle bird of paradise dress as well as an array of tartan mini kilts and bustiers.
Vivienne Westwood is being largely credited for bringing modern punk and new wave fashions into the mainstream.