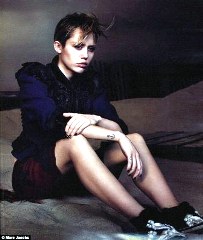 c: dailymail.co.uk/Marc Jacobs
Months after his departure from French fashion house Louis Vuitton, the American design talent Marc Jacobs is back in news again with his eponymous line’s new Spring/Summer-2014 advertorial, featuring the California-based singer Miley Cyrus.
Shot in a dark sandy beach, the campaign showcases the 21-year-old blonde posing in an embellished navy blue jacket paired with embroidered maroon dress shorts.
Shot by David Sims and styled by Katie Grand, the advertisement images, which also showcase models Natalie Westling and Esmerelda Seay Reynolds alongside Cyrus, will feature on the February issues of top international fashion magazines.
Before the 'Wrecking Ball' hitmaker, big names like Meg White, Helena Bonham-Carter, Jennifer Jason Leigh, Dakota Fanning, Victoria Beckham and Sofia Coppola have also starred in Jacobs’s earlier campaigns.
The 50-year-old designer who has been on the creative helm of Louis Vuitton since 1997 stepped down from the position, to concentrate on his own eponymous label, right after showcasing his S/S-14 collection at the Paris Fashion Week’s September, 2013 calendar.
Based on a pre-dominantly dark, nightmarish and almost mourning like theme, his 41-piece ready-to-wear collection included thick floor sweeping Edwardian dresses, feathery cabaret-style jackets, decorative corsets, blue baggy jeans and bodystocking printed with the famous Stephen Sprouse graffiti.