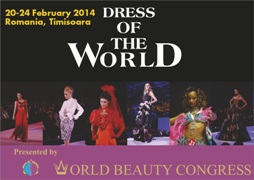 The Southeastern country of Romania is all set to host the international fashion competition ‘Dress of the World’, as part of the World Beauty Congress, scheduled to be held from February 20 to 24, 2014, in the western Romanian city of Timisoara.

According to the World Beauty Congress website, designers from all over the world can participate and compete in the event by showcasing one or two dresses, out of which the best dress would be selected and rewarded the ‘Dress of the World’ title.

The winner of the competition would be given the opportunity to embark on a promotional tour and represent the winning dress in 5 countries, and would also be provided the chance to be a jury member in several international and national fashion events.

This year’s ‘Dress of the World’ event would also have five designers from Azerbaijan representing the country and competing at the contest.