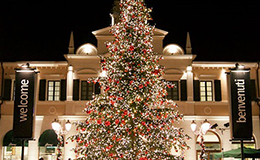 McArthurGlen, Europe's leading owner, operator and developer of designer outlets, reports an increase in like-for-like sales of 8% in December across all six of its UK centres following a 9% rise in November, as the rising ranks of savvy shoppers started their Christmas shopping earlier.

The traditional 'Man Dash' in the run-up to Christmas helped drive particularly strong sales in the popular gift choices of perfume & cosmetics (L4L up 18%) and jewellery (up 10%). Sportswear and childrenswear also performed well (both up 17%).

Sven Gaede, UK Managing Director, McArthurGlen, says: "Our strong Christmas trading results yet again highlight that a visit to a McArthurGlen centre has become an increasingly popular way to shop, with year-round savings of up to 60 per cent on the most sought-after luxury, designer and lifestyle brands in a premium shopping environment."

Ashford, Cheshire Oaks and York all saw a record-breaking first week of the sales (from 26 December till 2 January), compared with the same period last year, holding strong against aggressive price cuts on the High Street.

Over this key week in the retail calendar:

Sales at Ashford Desiner Outlet, with more than 80 stores, including the likes of Jaeger, Kurt Geiger, Reiss, Swarovski and Ted Baker, rose 18%, with many of the 70,000 shoppers during that week crossing the Channel from Continental Europe, especially France.

Cheshire Oaks Designer Outlet, with 145 stores, and some of the most sought-after luxury names in fashion, recorded its best-ever trading week since it opened as the UK's first designer outlet in 1995, with a year-on-year sales' increase of 21% and 162,000 shoppers over the seven days.

York Designer Outlet, with more than 100 stores, including the likes of Hobbs, LK Bennett, Paul Smith and The Kooples, recorded its highest ever sales on 27 December and an uplift of  21% on Boxing Day.

Global shoppers, in particular from China and Southeast Asia, also contributed to the strong Christmas trading, with a 12% increase in tax-free spending at McArthurGlen's six UK centres in November, and further strong increases expected for December.

Gaede adds: "To build on our successful trading, as the trend for smart shopping rises, this year we are investing £35mn in expanding Swindon Designer Outlet and we will be submitting planning permission to double the size of Ashford Designer Outlet, as well as carrying multi-million pound enhancements of Cheshire Oaks, Bridgend, East Midlands and York Designer Outlets. It's about taking the shopping experience at our centres to a new level of excellence, as well as providing our customers with a great day-out."

Nick Bubb, Retail Consultant, said: "In what was a very promotional environment in December in clothing retailing, McArthurGlen's distinct package of designer brands and savings in an attractive environment stood out to both domestic and overseas shoppers. McArthurGlen's designer outlets give consumers access to aspirational fashion brands that aren't widely available, and at discounts that seem more genuine than during the Christmas promotional frenzy seen at many multiple retailers."