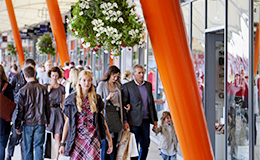 Ashford Designer Outlet, one of six McArthurGlen Designer Outlets in the UK, is set to double in size with the opening of a new luxury and premium shopping area.

The centre is 37-minutes from London by high-speed train to Ashford International, making it one of the closest designer outlets to the fashion-loving London market, as well as being just off the M20 linking London with the coast and Continental Europe.

Gary Bond, McArthurGlen's Managing Director, Development, says: "Ashford is already home to some of the most sought-after premium and designer brands in the UK.

"What we are seeing, given the good communication links with London, as well as with Continental Europe and the coast, and the emergence of London as a global shopping destination, is the rising demand for more luxury and premium brands."

He continues: "With the planned expansion of Ashford, we will be creating the next generation of designer outlets, taking the customer experience to a new level, and bringing in exciting new luxury and premium brands to tap into this demand."

McArthurGlen has a portfolio of 20 Designer Outlets in eight countries across Europe. These centres are home to some of the most sought-after international names in luxury, including the likes of Gucci, Burberry, Salvatore Ferragamo, Armani, Pal Zileri, Missoni, Moncler, Roberto Cavalli, Versace, Swarovski and Michael Kors, among many others.

With the new expansion at Ashford, which will continue with the village-style theme, the centre will offer around 358,000 sq ft of retail space and an additional 80 stores, bringing the total to 165 stores. This will make it one of the largest designer outlets in the UK.

McArthurGlen is expecting to make a planning application in early 2014, with works to start late 2014, and the opening of the new luxury quarter for the end of 2016.

Gary Bond adds: "We have received tremendous support from the local authority of Ashford, who fully understands how the expansion of the centre will not only create jobs, but also further establish Ashford Designer Outlet as a shopping destination, which in turn benefits the local economy, especially the tourism sector."

Brands to have opened in 2013 at Ashford Designer Outlet include Abercrombie & Fitch and Twenty8Twelve (both with their first outlet stores in the UK and Europe), as well as French Connection, Geox and Asics. They join thelikes of Crew Clothing Co, Fossil, Fred Perry, Lacoste, Links of London, Molton Brown, Polo Ralph Lauren, Radley, Reiss, Superdry and Swarovski.