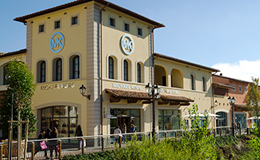 The second phase of Barberino Designer Outlet officially opened on 30 January, bringing a new sense of shopping excitement to the Florentine centre, as the new Tommy Hilfiger store started trading, together with units operated by Fossil and Ixos.

In all, the new phase adds a further 30 stores, and includes such sought-after names as the Nike Factory Store, which opened in the run-up to Christmas, and Michael Kors, which opened at the end of last year, together with the new, expanded Polo Ralph Lauren, which relocated from the first phase to leave space for what is now Europe's largest Polo Ralph Lauren Children outlet store.

Chiara Bellomo, Centre Manager for Barberino Designer Outlet, says: "With the additional new brands opening at the centre, which include some of the most sought-after names in the world of fashion, Barberino Designer Outlet is asserting its position as a key fashion destination in the Florentine region, both for local and international shoppers alike."

Barberino Designer Outlet, which first opened in 2006, is one of the most picturesque of McArthurGlen's centres, and one of five in Italy. The centre, set in the Tuscan landscape, straddles the River Sieve as it runs down from the Apennine Mountains, with wooden footbridges linking the two main walkways.

Together with Polo Ralph Lauren Children, new brands to open in the first phase since last autumn include many Italian names which are increasingly becoming well-known outside Italy. These include the likes of local Florentine brand Flavio Castellani; Gallo, famous for its colourful socks; Verona-based Moorer, known for its jackets and coats; and footwear and accessories brand Carlo Pazolini, particularly popular with the visiting Russian shoppers.

Barberino Designer Outlet welcomed around three million shoppers in 2013, up more than 11% on the previous year's figure, while spending by non-EU shopping tourists was up a staggering 46%. The centre is owned by Henderson Global Investors' European Outlet Mall Fund, in which McArthurGlen is also an investor.