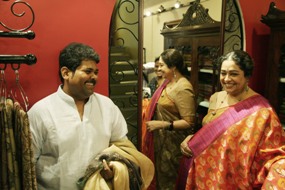 India’s most easily recognizable theater actor, Bollywood celebrity, television host and a reality show star Kirron Kher unveiled Textile and Fashion Designer Gaurang Shah's Heritage collection of sarees for spring-summer 2014..
The event "An Evening with Kiron Kher' was organised by Designer Gaurang at his flagship store in up-market Jubilee Hills which was well attended by hi-end fashionistas who have penchant for Hand-woven sarees.
"Hyderabad is one of the most important fashion and cultural cities in India, which brings together heritage and innovation. The collection for this season  include experimentation in weaves and prints, striking the perfect balance between heritage textiles and contemporary attitude."
Gaurang's collection of sarees for the coming spring-summer captures a woman’s femininity with a softer palate of peach, soft pink, mauve, butter yellow, ice blue sooth the eyes adds a striking twist in his 2014 collections.
It is a combination of ornaments his kota, khadi and organza with his textures in jamdani weaves. The neon collections amalgamate the trends into heirloom and are infused with intricate textures and contemporary weaves
There is nothing more beautiful than a hand-woven saree says actress Kirron Kher who never misses a chance to attend his shows and also add his collection in her wardrobe. Synonymous with the heritage hand-woven sarees the actress always draws rave reviews at every national and international red-carpet.
In conversation with the fashionistas at the launch Kirron Kher said she would love to do a line of sarees along with Gaurang in the future whose relationship with Gaurang is more than a designer-celebrity one she says.
Acknowledged Internationally for revival of the Indian Heritage Weaves Award Winning Textile and Fashion Designer Gaurang Shah is well known for his mastery in the art of Jamdani. His sense of weaves, textures and colors is admired by his customers which is growing in numbers every passing day. A connoisseur of the saree, he consistently strives to create something new in the 9 yard heritage textile every day.
His revival of the double ikat of patan patola and the korvai weaving technique on kanjeevaram with traditional 16th century designs is his trademark designer craftsmanship. His designs are translated into reality by his team of 500 jamdani weavers spread across India who have been trained by him to twist fabrics like khadi, uppada, paithani, benarasi, kota into modernity.
Gaurang who is a strong proponent of Indian Weaves invited Mira Sagar known for the weaves of Maheshwar, and Bappaditya known for his creativity for his weaves of Bengal combined together to showcase their collection of new heritage weaves for the summer.
In harmony with these hand-crafted sarees, Hyderabad for the first time saw a specially curated line of antique and silver jewellery by Sasha.