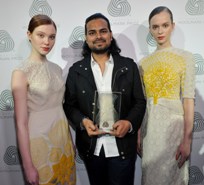 Rahul Mishra was announced the winner of the 2013/2014 International Woolmark Prize (IWP), during the final awards event held at the Triennale Museum, Milan.
To increase the global demand for Australian wool, it is vital for Australian Wool Innovation (AWI) to demonstrate the key role for Australian Merino wool in the international fashion industry.
Connecting the world's leading fashion designers with Australian Merino wool is extremely important due to the enormous influence these designers have in setting global textile trends for mainstream retail brands.
The IWP is the pinnacle of AWI's fashion promotion activities. It is designed to generate long term incremental demand by connecting emerging designers, emerging markets and consumers with Australia's versatile natural fibre.
"This global search for the very best upcoming designers has put Merino wool into the hands and minds of tomorrow's trend setters. Their designs and ideas will be seen on catwalks but will be worn in the streets of Shanghai, Tokyo, Paris and New York for many years to come and this is why The Woolmark Prize is such an important investment for woolgrowers," AWI CEO Stuart McCullough said.
An esteemed judging panel including Frida Giannini, Franca Sozzani, Tim Blanks, Colette Garnsey, Angelica Cheung, Alexa Chung and representatives from the global IWP retail partners, selected Rahul Mishra - representing India and the Middle East as the winner.
"For me, Rahul has won because of his ability to apply his knowledge of embroideries through wool, one of the most versatile fibres with originality in an unexpected way," explained Frida Giannini, Gucci's Creative Director soon after the announcement.
After a global search, reaching across 20 countries and involving over 48 designers, five talents reached the final round: ffiXXed, for Asia; Christopher Esber, representing Australia; Sibling, for Europe, Rahul Mishra, India and Middle East; and Altuzarra, for the USA.
Alongside prestigious recognition, the winner receives a financial contribution of AU$100,000 and the opportunity to be stocked in the most important retailers around the globe including Harvey Nichols, Saks Fifth Avenue, 10 Corso Como, Joyce, David Jones, Colette and mytheresa.com.
"His interpretation was so delicate and beautiful," said Alexa Chung. "I was really moved by Rahul's story. I believe he is well deserving of this award."
Rahul Mishra's Merino wool collection, that won the prestigious award, was based on craftsmanship and his incredible knowledge of techniques and embroidery.
The designer declared: "I feel like this is a dream and this is giving me new hopes for my future career. This award will change the perception of global fashion in regards to Indian fashion and this is all because wool - an amazing fibre, the fibre of possibilities."