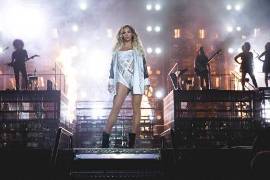 courtesy: beyonce.com/tour
After sporting stage costumes from well-known labels like Givenchy, Dsaquared2 and Emilio Pucci, the famous American singer Beyoncé has now chosen to don customized haute couture outfits from the house of Atelier Versace during her ongoing The Mrs. Carter Show World Tour.
The 32-year-old hitmaker was recently seen in not one but three back to back ensembles at her stage performances, held in Glasgow, Scotland.
The singer was spotted wearing a crystal overlay dress teamed with a black leather crop top, an armour-like white and silver sequined mini dress with leather straps and a chainmail jacket with her favourite number and words like Bow Down etched on the back.
Owned by the Milan-based fashion house Versace, Atelier Versace specializes in high-end haute couture pieces.
Started in April 15, 2013, The Mrs. Carter Show World Tour, which has already grossed a sum of about US$ 188.6 million, will end on March 27, 2014.