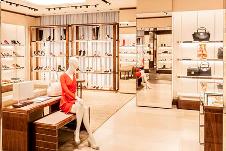 Salvatore Ferragamo, one of the world’s most renowned luxury brands, announces the reopening of its fully renovated Vienna flagship store.

The boutique is situated at Kohlmarkt 7, in the heart of the city, within one of the Austrian capital’s most prestigious neighbourhoods and exclusive shopping areas, near the former imperial residence.

The store, which Ferragamo originally opened in 2003, is inside a historic palace dating back to the late 19th century and designed in the typical Gründerzeit architectural style, with significant decorations and a suggestive facade.

The store’s interior - spanning a total surface area of roughly 370 square metres - is elegant and luxurious, in line with Ferragamo’s signature style, and exudes a refined ambience with special touches.

The various product areas flow in a series of reflections and glimpses, highlighted by mirrored passageways and gold travertine inlays. The boutique entrance, which affords guests a complete view of the Salvatore Ferragamo range, opens up to a space devoted to bags.

Next, the shoe and women’s RTW collections follow, with raffia upholstery in a soft palette. The final room, which houses the men’s collections, is more masculine, featuring glossy lacquered walnut surfaces and oak floors set in a fishbone pattern.

“The renovation of our historic Vienna flagship store is part of the Ferragamo Group’s growth plan, which not only provides for the opening of new Salvatore Ferragamo brand stores, but also entails the renovation and expansion of showroom spaces in boutiques already open in major cities around the world to further boost their performance,” explained Michele Norsa, CEO of Salvatore Ferragamo.

“Given its location and Central European influence, Vienna is taking on an increasingly interesting role in business, as it is a key gate to Eastern Europe and Asian markets”.

Salvatore Ferragamo S.p.A. is the parent company of the Salvatore Ferragamo Group, one of the world's leaders in the luxury goods sector and whose origins date back to 1927. The Group is active in the creation, production and sale of shoes, leather goods, clothing, silk products and other accessories, as well as women's and men's perfumes.

With over 3,000 employees and a network of over 620 single-brand stores as of 31 December 2013, the Ferragamo Group operates in Italy and worldwide through companies that allow it to be a leader on European, American and Asian markets.