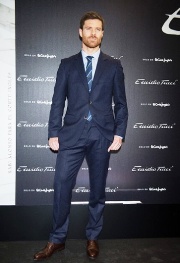 c: vogue.es/El Corte Ingles
Xabi Alonso, the famous Spanish footballer, has been signed on as the ambassador of Spain’s popular menswear brand Emidio Tucci for the fourth time in a row.
The 32-year-old Real Madrid midfielder has recently unveiled a new spring-summer 2014 collection of the Madrid-based label, owned by the famous department store group El Corte Inglés.
Inspired by the Italian island of Capri, the new range is targeted towards the modern urban men with a sophisticated elegant sense of style.
Slated to be available for sale from April 11, 2014 onwards, the menswear pieces are based on a palette of Mediterranean blue and soothing earthy tones.
Spread across Spain and Portugal, founded in 1940, the only remaining Spanish department store chain El Corte Inglés is considered to be the biggest department store group in entire Europe.
Other than Emidio Tucci, the group also operates a line of affordable menswear range titled Hominem, which is sold in some selected 25 locations of the firm.