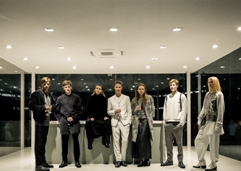 Calvin Klein, Inc. announced that the company held a multi-brand event in Singapore to celebrate the Calvin Klein brand across Asia with a one-of-a-kind architectural installation.

For the one-night-only occasion, Calvin Klein, Inc. presented a unique concept house, designed by renowned American architect Joshua Prince-Ramus, uniting many of the company’s different labels and product categories under one roof. The structure was constructed within a hangar on the grounds of the former Kallang Airport – which was decommissioned in 1955 and has since been designated as an architectural landmark.

The installation marked the first time a branded event was held in the space and employed technology to engage event guests in the interactive experience. Calvin Klein Home pieces were featured throughout and there were over 30 live models – including Calvin Klein Jeans model Matthew Terry, who was featured on the deck of the house in a swimming pool.

The models moved about the voyeuristic house wearing key looks from the Fall 2014 Calvin Klein Collection, Calvin Klein platinum label, Calvin Klein Underwear and the newly relaunched Calvin Klein Jeans line. Each brand had its own designated space within the concept house, allowing each its own distinctive experience, while making a powerful statement about the complete Calvin Klein lifestyle brand.

Mr Prince-Ramus the Principal of REX previously collaborated with the Calvin Klein Collection brand in 2008, to create a futuristic concept home, entitled “Madison Avenue (Doll) House,” that served as the centerpiece of the annual holiday window display featured in the brand’s Madison Avenue global flagship store in New York City. The installation spoke to the needs of modern, urban living, while addressing the use and importance of space.