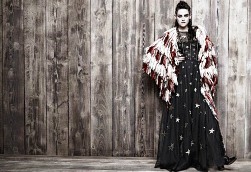 courtesy: Vogue Australia
Internationally renowned French fashion house Chanel is all set to release its Texas-inspired Métiers d’Art collection campaign, starring the popular 24-year-old Hollywood actress and Twilight movie series’ sensation Kristen Stewart.
Shot under the aesthetic guidance of the Parisian label’s creative director of German origin, Karl Lagerfeld, the advertisement images and behind the scenes video showcase the American star in an array of western-inspired cowgirl attires, such as blanket ponchos, ruffled blouses and fringe detailed outfits.
The new advertorial will be released sometime in May, 2014 internationally.
Peppered with Texan vibes, the fun and fierce Métiers d’Art collection, which was originally unveiled at Chanel’s December, 2013’s pre-fall 2014 show in Dallas, features earthy-toned tweed suits, prairie skirts, flowing dresses, 1970’s style A-line skirts and oversized warm Aztec-motif sweaters.
Before Dallas, the Métiers d’Art soirees have taken place in the world’s most exotic cities like Versailles, Venice, Shanghai, Moscow and Edinburgh.
Founded in 1909, Chanel is a high-fashion house that specializes not only in haute couture and ready-to-wear clothing but also luxury goods and fashion accessories.
Stewart, who has earlier appeared in three major advertisement campaigns by the French couture label Balenciaga, has followed in the footsteps of Tilda Swinton, Blake Lively, Keira Knightley and Diane Kruger in posing as the face of Chanel.