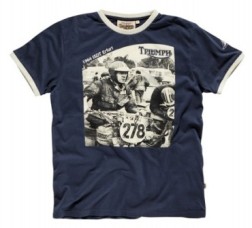 courtesy: SoyMotero.net/Triumph
The famous British motorcycle manufacturer Triumph Motorcycles has just unveiled a new spring-summer 2014 collection, inspired from the casual-fashioned looks of the late American actor Steve McQueen.
With an aim to pay homage to the charismatic star, whose passion for motorcycle riding had helped in popularizing the brand in the 1960s and 70s, the clothing range includes jackets, gloves, shirts, hoodies and jeans.
Adorned with a black and white image of the actor, who was known for his on-screen, anti-hero persona, the 1960s-styled McQueen Desert Racer Jacket features a smart inner lining and extra padded support on shoulders and elbows.
Based in jet black, the leather crafted McQueen Gloves features short cuffs and perforations on the back to provide proper ventilation to the motor bike rider’s hands.
Other than the aforementioned creations, the motorcycle company has also launched a special McQueen Capsule Collection 2014 which includes some vintage-inspired cotton made pieces such as a sweatshirt, two T-shirts, a polo shirt and a cap.
Founded in 1984, Hinckley-based Triumph Motorcycles had earlier marketed clothing lines dedicated to celebrities like Marlon Brando, Bob Dylan, James Dean and Elvis Presley.