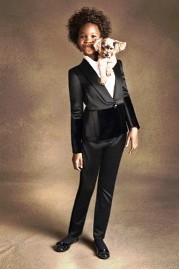 courtesy: WWD/Armani Junior
Internationally acclaimed Italian fashion house Armani has roped in the youngest ever Oscar nominee Quvenzhané Wallis as the face of its high-end children’s and teenage fashion line Armani Junior.
The 10-year-old American child actress will appear in the label’s forthcoming Fall-2014 campaign, shot by the famous French-born advertising photographer of kids and babies Stefano Azario.
Slated to be published in international fashion publications from June, 2014 onwards, one of the advertisement images showcase the pint-sized performer, posing with a cute puppy perched on her left shoulder, in a shiny tailored satin tux paired with a pristine white shirt.
Founded in 1975, the Milan-based fashion house Armani specializes in designing, manufacturing, distributing and retailing haute couture, ready-to-wear, leatherwear and home fashions. The company’s main labels are Giorgio Armani, Armani Collezioni, Emporio Armani, AJ | Armani Jeans, AX | Armani Exchange and Armani/Casa.
Wallis had earlier grabbed the attention of fashion media for a custom-made navy blue tulle Armani gown, which she wore to the red carpet of 2013 Academy Awards for winning the nomination in 2012’s hit film ‘Beast of the Southern Wild’.
Other than her Oscar nomination at the tender age of nine and the latest Armani campaign, the adorable star had also appeared in ‘12 Years A Slave’, and would be seen in the upcoming remake of ‘Annie’ alongside Jamie Foxx and Cameron Diaz.