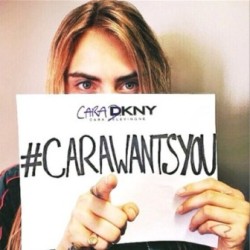 courtesy: Cara Delevingne/Instagram
After giving finesse to her role as the face of the popular American fashion label DKNY, the English catwalk model Cara Delevingne has now gone ahead and created a unisex capsule collection for the same.
According to WWD, the model’s debut line, which is slated to be available for sale from sometime in November, 2014, would feature clothes that match the 21-year-old’s personal style preferences.
The 15-piece Cara Delevingne for DKNY range will include sweat suits, tank tops, leather bomber jackets, parkas, beanies, T-shirts, and moto jackets with detachable sleeves.
Also a well-known socialite, actress and singer, the London-born multi-faceted fashion model commands a huge fan following on the social media with more than 5.5 million followers on Instagram.
Founded in 1989, the New York-based fashion label DKNY is an affordable fast fashion diffusion line owned by the Parsons’ alumnus Donna Karan, alongside her existing main line Donna Karan New York.

JD.com, one of Chinaâs largest online retailers, is headed for the...

The COVID-19 pandemic has demonstrated that textile and apparel...