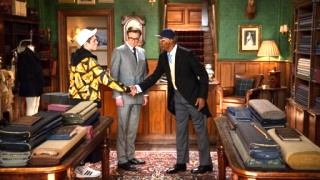 courtesy: hollywoodreporter.com
Mr Porter, the male counterpart to online luxury retailer Net-a-Porter, has collaborated with the upcoming spy movie ‘Kingsman: The Secret Service’ director Matthew Vaughn to create a new collection based on the costumes of the film.
Replete with Savile-Row-style tailoring, the Britain made 60-piece range features dapper clothing styles designed by the British movie’s costume director Arianne Phillips and some other leading menswear brands.
Slated to be unveiled sometime in September this year, the line will feature double breasted suits, jackets and trousers, created by the 51-year-old New Yorker Phillips, as well as shirts by Turnbull and Asser, Drakes’ ties and outerwear from Mackintosh.
The Kingsman collection will be available for sale even after the film finishes its theatrical run.
Arianne Phillips has designed costumes for movies like ‘A Single Man’, ‘W.E.’, and ‘Hedwig and the Angry Inch’.
Mr Porter is a global online retail destination that offers male fashions from some 180 of the world’s leading brands.
Launched in 2000, Net-a-Porter offers a range of latest women’s designer clothing and accessories from over 350 international labels.
Due to be premiered on October 24, 2014, Kingsman: The Secret Service’s dazzling star cast includes the likes of Colin Firth, Samuel L. Jackson and Michael Caine.