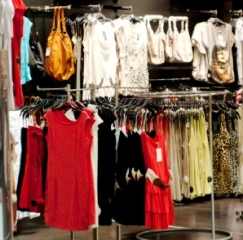 The exports of readymade garments from Bangladesh jumped by 16.68 percent to US$ 16.138 billion during the first eight months of the ongoing fiscal year 2013-14, compared to the $13.83 billion exports made during the corresponding period of the previous fiscal, latest data from the Export Promotion Bureau (EPB) showed.
Segment-wise, knitwear exports fetched $7.91 billion in July-February 2013-14 period, showing a rise of 17.5 percent over $6.732 billion earned during the same period last fiscal.
The exports of woven garments from Bangladesh recorded $8.228 billion during the eight-month period, registering an increase of 15.92 percent over export earnings of $7.098 billion in July-February 2012-13.
The 16.68 percent year-on-year growth in exports of apparel was higher than the 13.96 percent year-on-year rise observed in overall exports from Bangladesh during July-February 2013-14 period.
In fiscal year 2012-13 that ended on June 30, Bangladesh exported US$ 21.515 billion worth of knitted and woven garments, and the country has set an export target of US$ 24.147 billion for the current fiscal year, which would be an increase of 12.33 percent.
Compared to the 19.95 percent year-on-year growth in garment exports posted by Bangladesh during the first half of financial year 2013-14, the growth rate has decreased in January and February 2014. One of the reasons for this decrease is the implementation of the 76.66 percent rise in minimum wage for entry-level workers in the clothing industry since December 1, 2013.
With the presence of more than 5,000 garment factories that together employ nearly 4.2 million workers, Bangladesh is currently the second-largest garment exporter in the world, next only to China.