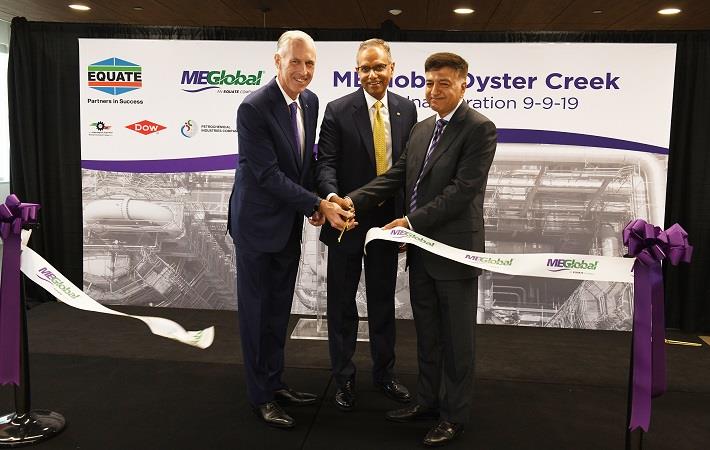 Pic: Equate Group
The Equate Group has inaugurated its new MEGlobal Oyster Creek site in Texas, US. A part of Equate's wholly owned subsidiary, MEGlobal Americas Inc (MEGlobal), the world-scale manufacturing facility will capitalise on US shale gas. It has annual capacity to produce 750,000 metric tons of ethylene glycol (EG), including monoethylene and diethylene glycol.
“This is a major achievement for the Equate Group and will benefit both Kuwait and the US,” said Equate president and CEO Ramesh Ramachandran. “With a growing global market for EG products, it will provide us with greater flexibility to satisfy our customers’ needs while capitalising on the US shale gas opportunity. This site builds on our global footprint and is part of our strategy to grow our value-added business as a leading ethylene glycol producer and supplier.”
The new site builds on the longstanding relationship between Equate's Kuwaiti partner, Petrochemical Industries Company (PIC) and the US partner, Dow Inc., a relationship that was forged during the liberation of Kuwait. It led to the formation of the Equate Petrochemical Company, a joint venture between Dow and PIC (42.5 per cent each ownership) as well as Boubyan Petrochemicals Co. KSC (BPC) with 9 per cent ownership and Qurain Petrochemical Industries Co. (QPIC) with 6 per cent ownership.
“The Equate Group began with large investments in Kuwait and now comes full circle with the investment in Texas. Our ability to leverage the project execution and operational excellence expertise of Dow allowed us to deliver the project on time and on budget which is a remarkable accomplishment,” Ramachandran added.
The project achieved several milestones in its construction, including more than three million consecutive safe work hours.
“This is an important milestone in Equate history, adding manufacturing capacity on the US Gulf Coast to satisfy customer needs in the region. Equate’s glycol footprint in the Americas is as large as that in Kuwait. The community in Texas has been very welcoming to this investment and we look forward to being a part of this region,” said Equate executive vice president Naser Al-Dousari.
The site created 55 new full-time long-term jobs and 25-35 contract jobs. It employed almost 2,000 construction workers at peak.
Commercial quantities of finished product are expected to begin shipping by November 2019.
Monoethylene and diethylene glycol are used in several market applications including polyester fibres, polyethylene terephthalate (PET) bottles and packaging, antifreeze and coolants, paints, resins, deicing fluids, heat transfer fluids and construction materials. (RKS)