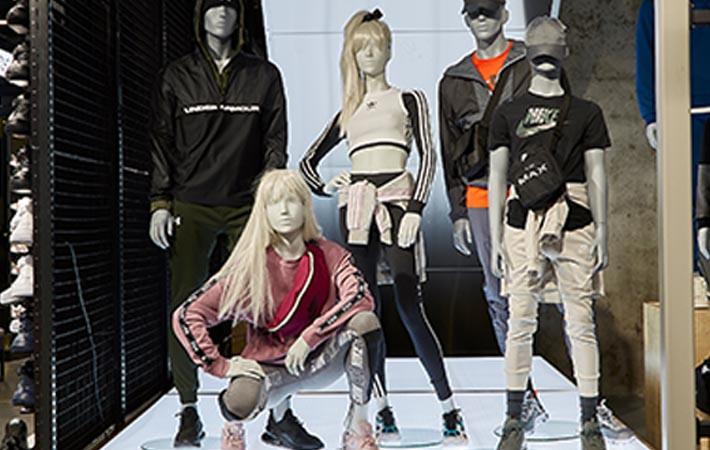 Pic: JD Sports
Total revenue of JD Sports Fashion rose by nearly 50 per cent in fiscal 2019 to £4,717.8 million as compared to £3,161.4 million in 2018. Like-for-like store sales across all group fascias, including those in Europe and Asia Pacific, increased by 1 per cent with the overall like-for-like growth including online increasing by more than 5 per cent.

The revenue includes £1,237.5 million from businesses which were not like for like for the year, principally Finish Line (£956.6 million) for the 33 weeks post acquisition and Sport Zone (£183.9 million), which was a member of the group for the full year following completion of the acquisition on January 31, 2018. The gross margin in the year of 47.5 per cent was slightly behind the prior year at 48.4 per cent as a consequence of the lower margins in the acquired Finish Line and Sport Zone businesses.

"I am very pleased to report that the group continues to make excellent progress with group EBITDA (before exceptional items) increasing by a further 27 per cent, being more than £100 million, to £488.4 million (2018: £385.2 million). The headline profit before tax and exceptional items increased by a further 16 per cent to £355.2 million (2018: £307.4 million) and, after delivering a headline profit of £100 million for the first time in the year to January 2015, the headline profit has now increased by more than £250 million over the subsequent four years, a compound rise in excess of 37% per annum. The group profit before tax increased 15 per cent to £339.9 million (2018: £294.5 million)," Peter Cowgill, executive chairman, said.

The company firmly believes that the elevated and dynamic multi-brand multichannel proposition of the core JD fascia, which enjoys the ongoing support of the key international brands, has the necessary agility to continue to exceed consumer expectations and prosper in an increasing number of international markets.

"We believe that our acquisition of the Finish Line business in the United States, the largest market for sport lifestyle footwear and apparel and the home to many of the global sportswear brands, will have positive consequences for our long-term brand engagement whilst significantly extending the group's global reach. We maintain our belief that Finish Line is capable of delivering improved levels of profitability," explained Cowgill.

"Given the significance of Easter trading to the overall result of the group and the change in the timing relative to last year, any announcement of like for like sales performance in the year to date would lack precision. However, we are pleased with the continued underlying positive performance of the Group and are excited by the major developments ahead," concluded Cowgill. (RR)