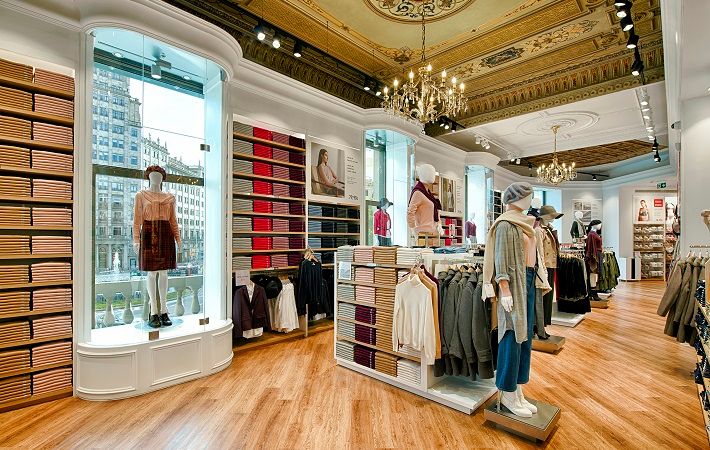 Pic: Fast Retailing/ Uniqlo
Fast Retailing, a Japanese manufacturer and retailer, reported 9.9 per cent revenue growth to ¥1,698.0 billion (Japanese Yen) in its third quarter (Q3) YoY FY21 ended on May 31, 2021, compared to the revenue of ¥1,544.9 billion in the corresponding period of prior fiscal. Profit for the period rose to ¥156.9 billion (Q3 FY20: ¥91.5 billion).
“The group’s medium-term vision is to become the world’s number one apparel retailer. In pursuit of this aim, we focus our efforts on expanding Uniqlo International, as well as our GU brand and our global e-commerce operation,” the Japanese retailer said in a statement.
The company’s gross profit for Q3 FY21 increased to ¥858.8 billion (¥751.3 billion), while operating profit jumped to ¥227.9 billion (¥132.4 billion).
Revenue from Uniqlo Japan's expanded 12.7 per cent to ¥675.1 billion (¥598.8 billion). From March to May 2021, the segment’s revenue increased considerably on the back of strong sales of Uniqlo U T-shirts, Kando pants and other Summer ranges along with loungewear, ultra-stretch active pants, and other items, as company stated.
Uniqlo International’s revenue surged 9.8 per cent to ¥739.6 billion (¥673.5 billion) with continued growth in Greater China (¥431.5 billion). Moreover, Uniqlo South Asia, Southeast Asia and Oceania (Southeast Asia, Australia, and India) reported increase in revenue to ¥165.2 billion, whereas Uniqlo North America and Europe reported large revenue gains and smaller operating losses as the Covid situation improved in those regions.
With rise in sales of chef’s pants, airy shirts, and coloured flared slacks, GU business during Q3 FY21 increased 7.1 per cent to ¥200.8 billion (¥187.5 billion). However Global Brands segment which experienced significant drop due to Covid in the first half, reported 3.3 per cent dip in revenue to ¥80.5 billion (¥83.3 billion).
“We continue to open multiple new Uniqlo stores in all markets and areas in which we operate and strive to instill deeper and more widespread empathy for Uniqlo’s LifeWear concept of ultimate everyday wear. Within the Uniqlo International segment, China and Southeast Asia regions are continuing to serve as the key pillars of our group's business and growth,” the company further added.

At a recent conference, as US retail executives observed the omicron...