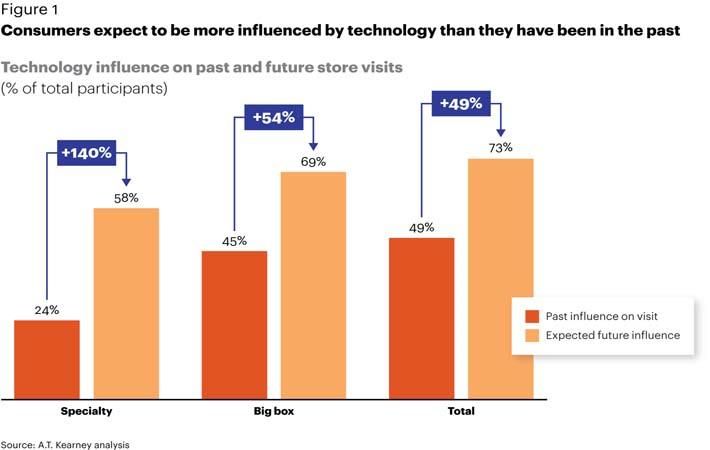 Pic: AT Kearney
When it comes to in-store technologies, consumers have heard all the promises but are still waiting on retailers to deliver – most retailers’ performance is still lagging consumer expectations, says a new survey which polled 1,000 people from various demographic and economic backgrounds about emerging retail technologies used in physical stores.

The first observation is that retailers are lagging consumer expectations for retail technology .While three out of four respondents were aware of at least one of the targeted retail technologies, only one in three have experienced even one of them in their shopping experiences.

For example, 45 percent of respondents said they had heard of augmented reality but never experienced it in a store. The results were similar for the other technologies: 60 per cent for 3D printing, 40 per cent for mobile point of sale, 36 per cent for cashier less checkouts, and 30 per cent for interactive screens.

The survey revealed a nearly 50 per cent increase between the number of consumers who indicated that technology had influenced their shopping choices in the past, to those who expect technology to influence their shopping choices in the future. This represents a substantial opportunity for retailers to address consumer expectations by bridging the gap.

The second observation was – big box retailers have led in retail tech, but consumers expect specialty shops to catch up. Forty-five per cent of respondents reported visiting a big box store because of technology, contrasted with 24 per cent who said they had visited specialty stores because of technology. However, 58 per cent of consumers expect retail technology to impact their specialty store choices in the future, nearly catching up to big box and presenting specialty retailers with a significant opportunity.

However, consumers clearly still want to spend time in stores. Reduced time in trial and sampling ranked lowest in appeal, with only 21 per cent of consumers citing such technology as important to their shopping experience. Combined with the consumer interest in customisation and novel experience, this presents retailers with a significant opportunity to drive foot traffic through enhanced trial and sampling experiences in store.

Ultimately, retailers have to make hard choices about which technologies they invest in and the size of those investments.

The survey suggests that retailers hoping to successfully bridge the consumer ‘awareness/ experience gap’ need to do seven things: look for opportunities to implement targeted technologies quickly, favouring pilots and agile implementations over long rollouts; big box retailers should continue to invest in retail technology, but be selective to ensure it is meeting specific consumer needs at the store; specialty retailers are expected to substantially increase investment in technology that enhances the overall shopping experience, and supplement with store personnel; big box retailers should direct the majority of technology investment toward speed and efficiency; understand the nuances of the consumer journey to ensure retail technology implementations meet a specific consumer need; invest in technology to reduce time in checkout and navigation, and consider technology to enhance the in-store trial experience; prioritise top markets and doors to maximise reach of technology and ensure its investment reaches as many consumers as possible. (PC)

When it comes to in-store technologies, consumers have heard all the promises but are still waiting on retailers to deliver â most retailers' performance is still lagging consumer expectations, says a new survey which polled 1,000 people from various demographic and economic backgrounds about emerging retail technologies used in physical stores.