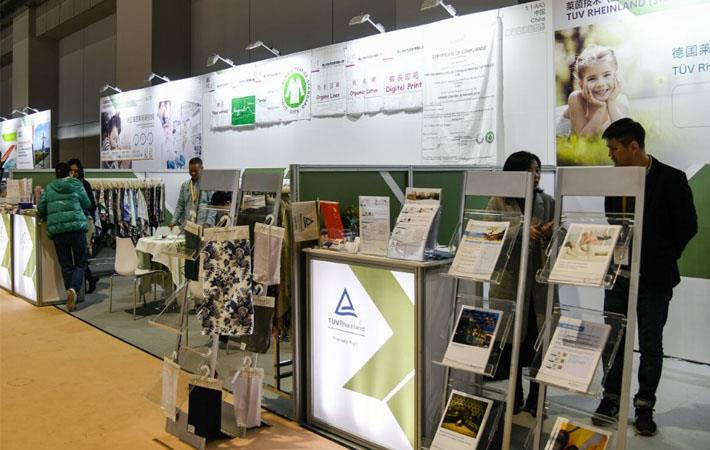 “At each fair we aim to curate a fringe programme that will inform, engage and connect thought leaders from around the world,” said Olaf Schmidt, vice president of textiles and technologies at Messe Frankfurt.

The keynote ‘The Current Situation of China’s Textile Industry’ was delivered by Xu Yingxin, vice president of China National Textile and Apparel Council and chairman of CCPIT-TEX (co-organiser of the fair). There were many takeaways from the keynote and the panel discussion that followed.

After decades of reform, China’s textile industry has become a key player on a global scale, being one of the country’s first markets to open up. In 2018, China’s chemical fibre production exceeded 50 million tons, making up over two thirds of global production. Textile exports from China reached 37.6 per cent of the world’s total in 2018, a 3.5 per cent increase from the previous year, while apparel exports accounted for 31.3 per cent of the world’s total.

Although purchasing power has slowed slightly, as more Chinese consumers become wary of over-spending, the textile industry in China still experienced high demand from its domestic market. Due to the population size, the industry also has a safety net in terms of clothing being, a basic necessity. Domestic retail sales of apparel grew by 8 per cent in 2018, and have continued to grow in 2019, although not as quickly as previous years.

Part of the panel discussion focused heavily on the importance of maintaining a strong consumer economy in order to maintain strong domestic purchasing power. Paul Alger (UK Fashion & Textile Association), warned of the social consequences and lack of purchasing power that come as a result of a weak consumer economy, as recently seen in the UK.

Similarly, Rosette Carrillo (Confederation of Wearable Exporters of the Philippines) noted that the Philippines had much to learn from China’s domestic market growth. Meanwhile, K V Srinivasan (TEXPROCIL) indicated that India’s consumer economy benefits from their strengths, including a rich textile heritage and skilled technical workforce.

Investments in the textile industry have also slowed as US-China trade war frictions knocked confidence. However, there is still growth. China’s textile industry’s investments in fixed assets grew by 5 per cent in 2018, before slowing in the first half of 2019. Investments have focused on technology and innovation, resulting in increased productivity.

With its position at the forefront of the world’s textile industry, China is now entering a new era of textile manufacturing and design. Three key missions were noted for China’s plan moving forward: technology and innovation, culture and local talent and sustainability.

Sustainability was a key point during the panel discussion. Carol Hanlon (Textile Clothing Footwear Resource Centre, Australia) pointed out China’s capacity, as a leader of textile production, to drive change in circularity. Both Hanlon and Alger acknowledged the demand for sustainability in the future consumer: younger generations who are increasingly associated with climate activism.

The Belt & Road initiative was first proposed in 2013, and in 2014 became one of three major national development strategies in China. As of July 2019, the Chinese government has signed co-operation agreements with 136 countries along the route, which runs through three continents. During the initiative’s first five years, the total trade volume between China and countries along the Belt & Road route has exceeded $6 trillion, accounting for nearly a third of China’s total trade in goods during this period.

These investments, both domestic and overseas, have two main directions. First, to create a worldwide production capacity, by building efficient manufacturing bases in China, Africa and countries along the Belt & Road route. And second, to develop international co-operation to strengthen resources throughout the supply chain (raw materials, design, R&D and even marketing). Between 2015 and 2018, Vietnam received the highest investment volume by far, followed by Ethiopia, Myanmar, Egypt, Cambodia, Malaysia, Pakistan and Tajikistan.

An estimated 18 per cent of China’s textile exports go to US, making this China’s largest export market for textiles, valued at around $50 billion. This also makes China the largest exporter of textiles and apparel to the US, accounting for 38 per cent of the nation’s total imports.

With ongoing tensions, tariffs and uncertainties, this has opened up opportunities for other countries to step in. Ade Sudrajat (Indonesian Textile Association) noted that Indonesia has experienced a decrease in purchasing power and views the trade war as an opportunity – as seen in Vietnam, whose exports to US more than doubled in 2018. Indonesia is reportedly open to Chinese investment, seeking to develop local e-commerce and start-ups, and recognising a need for efficiency and marketing.

Similarly, Yuttana Silpsarnvitch (The National Federation of Thai Textile Industries) sees an opportunity for Thailand amidst trade frictions. He pointed out Thailand’s agricultural strengths, including traditional Thai silk as well as unique products such as pineapple yarns and banana yarns.

Exports of garments and hard goods in the Philippines are likely to...

Aptos, a leader in retail technology solutions, has announced that it ...