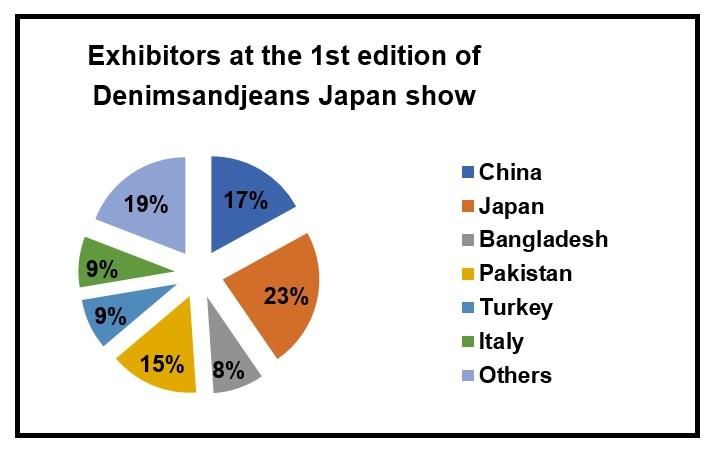 Pic: Denimsandjeans
Over 49 companies from Japan and around the world are joining the 1st edition of Denimsandjeans Japan. The list includes almost all major denim suppliers from Japan and 12 other countries including Italy, China, Turkey, Indonesia, Pakistan, India, Bangladesh, etc. The entry in the show is on invitation only. However, buyers can register on the spot as well.

The major participation in the show is from Japan. Eleven companies including Kurabo, Kuroki, Collect-Japan Blue Co, Nihon Menpu, SAAB, Showa and Sinhohara Textile will be representing the Japanese denim industry at the show.

Another country which will see maximum participation is China. Eight companies form China including Advance Denim, Foison, Lucky Textile and Foshan Huafeng will be participating in the Japan show.

Next to China, Bangladesh is the second biggest jeans exporter to Japan. Last year, Bangladesh's share in the total jeans import of Japan was about 18 per cent, and it has been increasing by the end of every passing year.

At the Japan show, three big garment vendors from Bangladesh - Denimach (Armana Group), M&J Group and Noize Jeans will be exhibiting their new collection for Spring Summer 2021. Pioneer Denim, one of the fastest growing fabric manufacturers from Bangladesh, is also going to bring its innovation and new sustainable developments at the Japan show.

Apart from fabric and garments, the show will have some of the leading chemical manufacturers, accessories suppliers, washing laundries, fibre producers and technology providers at the show. The list includes Officina+39, Archroma, Ribbontex, Elasten, Jeanologia, VAV, Tonello and YilmakMakina.

Adriano Goldschimed is going to launch Wiser Wash in Japan at the show and Luigi Lovato (from Elleti) will present green copies of 4 vintage garments of the M.O.D.E and will replicate them also with Wiser Wash for which they have signed a license for Europe and Tunisia.

A special indigo museum by Arvind and a small museum of 100 years old vintage garments by Elleti will be set up at the show, which is going to be the 1st time experience for the Japanese visitors.

Over 49 companies from Japan and around the world are joining the 1st edition of Denimsandjeans Japan. The list includes almost all major denim suppliers from Japan and 12 other countries including Italy, China, Turkey, Indonesia, Pakistan, India, Bangladesh, etc. The entry in the show is on invitation only. However, buyers can register on the spot as well.
More Textiles News - Japan...