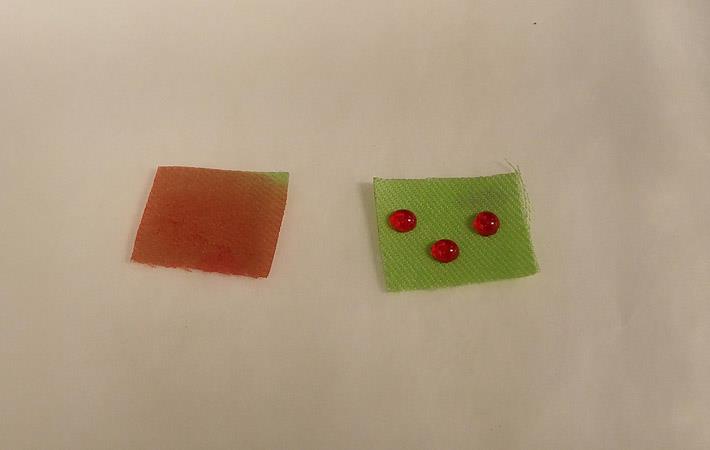 Courtesy: Cornell
A cross-campus collaboration in the Cornell University involving its colleges of engineering and human ecology has yielded a promising new material that may help develop oleophobicity, resistance to oil commonly applied to textiles, in a new environment-friendly way. The scientists have already filed for granting of patent for the innovation.
Oleophobicity helps textiles to get rid of stains such as those caused by spill of pasta sauce during washing. However, the coating that makes textiles oil resistant is fluorine-based and breaks down into chlorofluorocarbon gas, a greenhouse gas harmful to the environment.
The innovation has come from Emmanuel Giannelis, professor of materials science and engineering in the College of Engineering, and Jintu Fan, professor and chair of the Department of Fiber Science & Apparel Design in the College of Human Ecology.
"This is a great example of the greatness, if you will, of Cornell in terms of collaboration. [Fan] listened to my presentation and invited me to team up with him to basically apply some of the work that we were doing in polymeric membranes to textiles," said Giannelis, noting that a seminar he gave a few years ago led to his work with Fan.
A provisional patent for the material has been filed by the Center for Technology Licensing (CTL), according to Giannelis.
Fan noted that engineers don't always lend their expertise to the fashion industry. "In general, collaboration with the engineering department is very interesting and fruitful. They are very good and bring a lot of wonderful ideas. But maybe in the past they were not targeting the textile and fashion industry, which is a $3 trillion a year industry," he said.
At the time of his seminar, Giannelis and his group were working on super-hydrophilic polymeric membranes that are used in water purification, and Fan asked if they could team up and "basically apply some of the work that we were doing in polymeric membranes to textiles," Giannelis said.
They worked with an apparel maker on creating a polymer that could make fabric more breathable while retaining wrinkle resistance, which is always a challenge, and Giannelis said they made good progress along that line.
"The company came back and said, 'That is good and great - but can you do something similar with oleophobic coatings? It's a very different kind of chemistry, and something we had not worked on previously, but one of the great things about being at Cornell is that we have great students and postdocs who can take this kind of challenge and do great things," he said.
Postdoctoral researcher Genggeng Qi developed a polymer that combines well-known chemistry with a rough surface texture that creates little air pockets. Fluids with a high enough surface tension will ball up on this fibre and not stick, making for easy cleaning. This roughness uses the same principle as the water-resistant quality of the lotus leaf, which has a rough nanostructure and naturally repels water.
Fan is excited by early results of this material, noting that they've just done testing using mineral oil, which has a low surface tension. "We've found that even after 30 washings, it's still durable, which is great. Even if we can achieve [oleophobicity] that's even close to fluorine-based [polymers], that would be a huge breakthrough," he said.
Giannelis is cautiously optimistic about the work. "I don't want to declare complete victory. but we believe we are the first group to show that non-fluorine-based chemistry opens up the possibility to create oleophobic coatings that are probably good enough to resist stains from vegetable oils, olive oil, and other oils," he said. (SV)