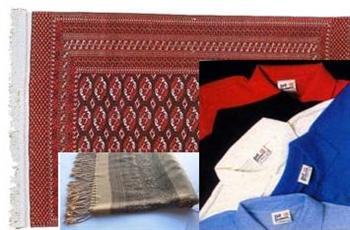 The exports of readymade garments, pashmina and woolen carpets from Nepal have shown double-digit decline during the first ten months of the current fiscal year, which began on July 16, 2012, according to Nepal’s central bank – Nepal Rastra Bank – statistics.
Nepal’s garment exports to third countries (except India) fell down by 27.9 percent year-on-year to Np Rs. 2.5 billion, during the first 10 months of 2012-13 period, Republica reported.
Nepal´s apparel exports are seeing a negative growth since the US Government ended its duty-free-quota-free facility, in 2005.
During the ten-month period, Nepal’s pashmina-made items worth Rs. 1.26 billion were sold overseas, recording a dip of 51 percent year-on-year.
The Pashmina entrepreneurs of Nepal are worried that the amount given by the Government towards promotion is insufficient to support the industry for exploring new markets, which has reduced its exports in the past few years.
Nepal’s carpet exports to third countries declined by 12.9 percent y-o-y to Rs. 4.95 billion, during the period under review.
Meanwhile, Nepal imported clothing worth Rs. 2.47 billion from India during the same period, recording a fall of nine percent compared to the same period in the last fiscal year. Garment imports from third countries, mainly from China, also fell by 27.9 percent to Rs. 2.5 billion.
Recently, the International Trade Centre (ITC), a subsidiary organization of the World Trade Organization (WTO), has promised a US$ 2 million aid for Nepal’s Pashmina Enhancement and Trade Support (PETS) project, to support the country’s pashmina industry.