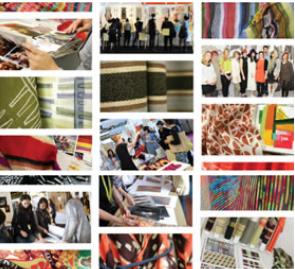 Texprint is a not-for-profit organisation dedicated to nurturing the best British-trained graduates in textile design. Each year it selects and mentors 24 new designers, guiding them into creative careers in fashion and interiors through the sponsorship of leading names in the industry such as Marks & Spencer, Pantone and Woolmark.

The programme launches with:

Texprint London at The Triangle Building, Chelsea College of Art and Design, London. Open to general view: Thursday 12 July 10.30am-6pm and Friday 13 July 9am-5pm. Texprint London presents a gallery-style display focusing on key pieces from each of the 24 new talents. Their full collections will be available to view on request.

Texprint is a not-for-profit organisation dedicated to nurturing the best British-trained graduates in textile design. Each year it selects and#

Prior to the Private View, the 24 new designers will be judged for special awards for Body, Space, Pattern and Colour by a panel of creative luminaries:

The prizes will be given for any type of fabric whether created by print, weave, knit or mixed media. And the four prize winners will each receive £1,000, sponsored by Pantone X-Rite, Liberty Art Fabrics and The Clothworkers’ Foundation.

A further designer will be chosen to receive the Lululemon Texprint Award. The new award is sponsored by the activewear company Lululemon Athletica and will be chosen by executive vice president and chief product officer Sheree Waterson, with a prize of £1,000 and a three-month paid internship at Lululemon headquarters in Vancouver, Canada.

Texprint programme – which is funded by industry and charitable institutions – has helped close to 1,000 new designers launch their careers.  Texprint’s  alumni  have  gone  on  to establish their own brands, such as fashion designer Alice Temperley and scarf designer Emma J Shipley; set up design studios such as Kirsty McDougall of Dashing Tweeds and knitwear designer Sophie Steller; or have joined the creative departments of international design houses and major retailers, including Givenchy, Tom Ford, Habitat and Marks & Spencer.

The VIP breakfast is an invitation-only event which will enable Texprint’s management team to introduce the new designers and the work of the organisation to industry decision makers and selected press in the company of Texprint’s ambassadors and key supporters.