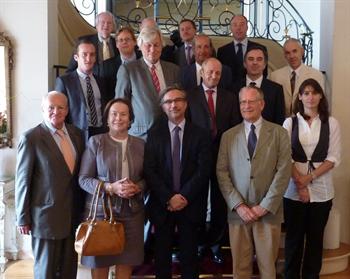 For the fourth consecutive year, The Théophile Legrand Foundation (Institut de France) is pleased to announce its organising of the ‘Théophile Legrand International Prize for Textile Innovation’. The ceremony will take place on Sunday, 7th October 2012 at 14.30 at the Abbaye Roayle de Chaalis in Oise, France.

The most significant award of its kind, the Prize for Textile Innovation comes with a total prize money of 18 000 Euros (divided between first and second place: 10 000 Euros and 8 000 Euros respectively).

The panel will be chaired by Christian Cambier (descendent of Théophile Legrand; founder of the French Wool Trade in the nineteenth century). The judging panel, made up of a group of experts, includes: Professor Paul Kiekens – Secretary General of the Association of Universities for Textiles (AUTEX) at Gent University, Belgium; and Professor Vladan Koncar – Director of the GEMTEX Laboratory and President of the International expansion of ENSAIT in Roubaix.

For the fourth consecutive year, The Théophile Legrand Foundation (Institut de France) is pleased to announce its organising of the 'Théophile#

This international prize is open to Researchers, Postgraduate Researchers (PhD students) and MA Students. Its aim is to encourage textile innovation, research in the field, competition and imagination through shining light on technical or industrial creations.

The steering committee and judges of experts will meet on 13th September 2012 in Paris. Entries (to be written in French or English) should reach the Foundation no later than 14th August 2012. Applications submitted after this date will not be considered.

Mr B K Patodia
GTN Group
India would definitely benefit by expanding the base for...