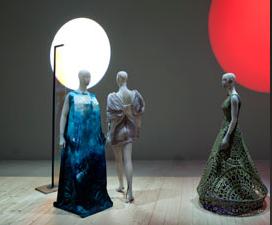 “Now it’s all about India” – that’s how clearly the great German designer Karl Lagerfeld put it in 2012 when he launched his Metier d’Art collection for the fashion empire Chanel. And that’s what it’s all about at the Danish contemporary art museum ARKEN in the period 18th August – 13th January.

In the museum’s first fashion exhibition INDIA : FASHION NOW, ARKEN takes a close look at seven Indian fashion designers, all of whom have positioned themselves centrally on the international fashion scene.

It’s a veritable cornucopia of spectacular and breathlessly beautiful creations that the seven Indian designers are presenting in ARKEN’s exhibition,” says the museum’s director Christian Gether.

Every one of the seven designers has been hand-picked for the exhibition and is part of the pacesetting Indian fashion scene that has grown up since the end of the nineties. These are designers who challenge and experiment with the traditional Indian garment culture.

They transform Indian fashion through sophisticated stylistic experiments and develop the framework for what Indian fashion can be. With them they have some unique traditions of craftsmanship which they introduce into an international context and thus create a new, exciting idiom which elegantly or teasingly builds a bridge between the local and the global, between past and present.

In collaboration with the Danish broadcasting corporation DR, ARKEN has made a portrait film about the Indian star designer Manish Arora, who until very recently was creative director at the fashion house Paco Rabanne. The film will be shown on the TV channel DR K and in the exhibition.

The reading room has been designed specifically for ARKEN and is built up around some of Doshi Levien’s most acclaimed furniture: the armchair Paper Planes, the bench Charpoy, the prizewinning sofa My Beautiful Backside, the chair Impossible Wood and the bench Principessa, inspired by Hans Christian Andersen’s tale “The Princess and the Pea”.