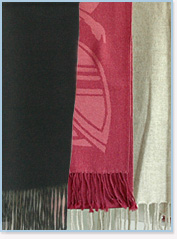 courtesy: NPIA
The Nepal Pashmina Industries Association (NPIA) is planning to register the ‘Chyangra Pashmina’ trademark in other countries and regions under its Phase II plan by 2015.
NPIA plans to register Chyangara Pashmina trademark in the Middle East, Africa, Central Asia and Asia-Pacific regions by 2015, The Himalayan Times reported quoting NPIA general secretary Vijoy Dugar.
The Phase II plan of NPIA would start after successful promotion of the trademark under the Phase I, Mr. Dugar said.
Currently, NPIA is working to register the Chyangara Pashmina trademark in 47 countries, which are frequent buyers of Nepali pashmina products, under its Phase I plan.
So far, the trademark has been registered in 42 countries, but its registration process is pending in five countries—Brazil, China, Malaysia, Russia and the UAE.
The Government of Nepal has sanctioned Np Rs. 2 million for registration of Chyangara trademark in these five countries, but the Trade and Export Promotion Centre is yet to receive the amount, Mr. Dugar said.
He said Nepali pashmina exporters have bagged satisfactory orders, ahead of the forthcoming Christmas and winter season.
Meanwhile, the demand for pashmina knitwear has gradually increased over the past four years, Mr. Dugar said.
Japan is the top importer of pashmina knitwear from Nepal, followed by the US, the UK, Germany, Hong Kong and Switzerland, he added.
Men’s and women’s sweaters, vests, caps, gloves and baby wear are the main pashmina knitwear products exported by Nepal.
Shawls, mufflers, blankets, stoles and scarves are the other pashmina items exported by Nepal.
During the first ten months of the Nepali fiscal year that began on July 16, 2012, Nepal exported pashmina-made items worth Rs. 1.26 billion, recording a dip of 51 percent year-on-year, according to statistics with the Nepal Rastra Bank.