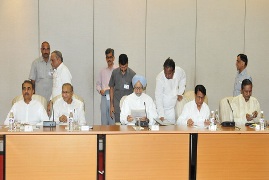 courtesy: pmindia.nic.in
The Government of India would frame a new competitiveness strategy for the textiles sector. This was among the several decisions taken at a meeting of the High Level Committee on Manufacturing (HLCM) led by Prime Minister Manmohan Singh.
In order to expand the textiles sector which is labour intensive and contributes substantially to exports, the HLCM endorsed a new competitiveness strategy for the textiles sector, said a statement from the Prime Minister’s Office.
The goal would be to leverage the strengths that India has in cotton and other fibres to enhance employment generation and achieve a greater share in global markets, especially in apparel, the statement said.
The core of the strategy is to facilitate the rapid scaling of competitiveness of the garment segment of the textile sector in the country through a comprehensive package of measures.
Some of the elements of the strategy include having ready availability of work space, having adequate and comfortable housing for workers, having more flexible work timings, leveraging textile clusters and obtaining the best technologies.
An Inter-Ministerial Group (IMG) led by Secretary (Textiles) will work out the Action Plan for the Textiles sector in four weeks time, the statement said.
Speaking at the HLCM, Prime Minister Singh said manufacturing has to be the backbone of India’s growth strategy for the next decade.
He said the Indian economy is currently witnessing a transformation. The agricultural sector, which provides livelihood to more than half of India’s population, now contributes less than 15 percent to the country’s GDP, he added.
For Indian economy to grow at 8-9 percent in future, sustained growth in manufacturing sector, especially labour-intensive manufacturing sector, is necessary, Mr. Singh said.
He added that only the labour-intensive manufacturing sector can give opportunities to many who are looking for better avenues outside the agricultural sector.
In fiscal year 2012-13, India’s textile exports, including apparel exports, stood at US$ 34 billion.
Soon after assuming office last month, Textiles Minister K Sambasiva Rao said he wishes to boost textiles exports to about US$ 50 billion this fiscal.