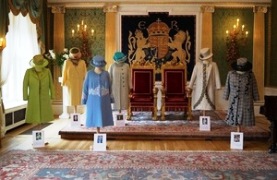 Hillsborough Castle has opened a new exhibition of a collection of outfits worn by Queen Elizabeth II during her recent visits to Northern Ireland.
The collection consists of six outfits that the Queen wore during her visits, including the Diamond Jubilee outfit she wore when she visited Northern Ireland in June 2012, as well as the outfit she donned during her visit to Dublin in 2011.
Five of the iconic outfits and hats are created by Angela Kelly LVO, personal assistant and senior dresser to The Queen since 2002.
Angela Kelly also designed The Queen’s outfit for the wedding of the Duke and Duchess of Cambridge.
The sixth outfit is designed by Karl Ludwig, business partner of John Anderson, who designed Her Majesty’s dresses from 1988 until 1996. Karl took over the mantle after John’s death in 1988 and The Queen continues to wear his designs till date.
The Secretary of the State for Northern Ireland, Rt. Hon Theresa Villiers MP, said that it is a privilege to have Her Majesty’s outfits on display at the Hillsborough Castle, and this year the exhibition has secured an extra month for visitors at the Castle to get the chance to admire the collection.
Hillsborough Castle is The Queen’s official residence in Northern Ireland during her visits.
The exhibition held at the Throne Room of the Castle, would be continued till September 29, 2013.